Tweet
print
write a letter
Fine-arts students from all over the Austin Independent School District come together in the summer to put on a show. Great idea, right? The teachers at the McCallum Fine Arts Academy thought so. And when they actually produced one last summer – Stephen Sondheim's A Funny Thing Happened on the Way to the Forum – AISD thought so, too. "Hey, let us sponsor it," the district said. So Fine Arts Academy theatre director Scott Tatum moved ahead with plans for a 2008 musical: Jonathan Larson's rock update of La Bohème, Rent. That show has a bit more bite than Forum, but Tatum secured the rights for a version adapted specifically for high schools. (Some language altered, one song cut.) And c'mon, the show won a Pulitzer. That makes it good, right?

So it seemed for a time – like all the way through auditions and casting the show last month. In fact, mid-June rehearsals were but five weeks away when Tatum and his colleagues on the production were notified by John May, AISD interim administrative supervisor of fine arts, that AISD could not support a districtwide production of Rent. No specifics were cited for the decision to withdraw support, just the assertion that Rent would not be well-received in some campus communities.

As the show deals openly with drug use, HIV/AIDS, and homosexuality, that's very likely, but here's the rub: In the notice that informed the teachers of the decision and the need for them to choose another show this summer, May offered a few alternatives: Les Misérables, Gypsy, and Sweeney Todd. So AISD was cool with last year's show featuring slaves and prostitutes – excuse me, courtesans – and thinks everyone would be fine with shows that feature more prostitutes, strippers (and mothers who push their daughters to become strippers), or bloody murders and cannibalism, but the district draws the line at gays and lesbians?

As it turns out, there won't be another musical this summer. Five days after the first notice, a second one was sent out, stating that the district was suspending production of a summer musical this year. This decision was described as "the best option." And that would be best for whom? 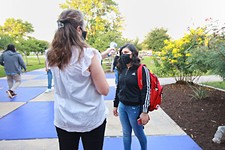