The ProArts/ACC co-production plays out like a Robert Johnson number: strong, sweet, natural, and full of longing 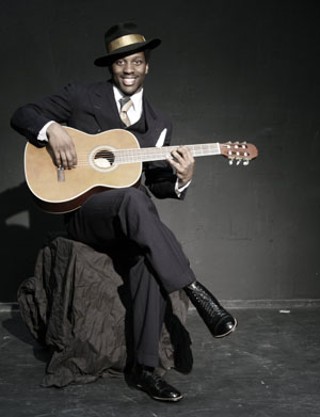 What happened when Robert Johnson went down to the crossroads? Did he best the devil with his sensational picking skills, or did he sell his soul to get them? Depends on who you ask.

Robert Johnson is a legend, in life and death, although that legend is clouded by so many half-truths, exaggerations, lies, and speculation that the truth lives in them as much as any hard facts. The famed blues guitarist passed away in Mississippi on Aug. 16, 1938, at the age of 27. Robert Johnson: Trick the Devil weaves its tale through both the facts and fiction surrounding the musician's last day, making its story as much about the legend of Johnson as the man himself.

Johnson may be the title character, but Trick the Devil takes its time focusing on the bluesman: The story, like a guitar string, slackens and tightens over time. The ProArts Collective/Austin Community College Drama Department co-production opens in Georgia's Colored Juke Joint, where the proprietor and her blind friend, Stokes, are idly telling stories to each other. Their language is so rich and their banter so natural that it doesn't matter that the arrival of conflict or other characters is delayed. Likewise, the action will slow down or altogether stop to allow for a monologue. You got to tell your story, no matter how long it takes.

Storytelling is at the heart of Trick the Devil. Characters reveal themselves through their tales, they communicate through them, their relationships change after hearing one another's accounts. The most dramatic moment in the play is not when a gun is aimed at someone's heart or when it's fired or when one of the characters dies, but when Robert Johnson tells the story of when he went down to the crossroads.

And Bill Harris' script is full of beautiful phrases, metaphors that stay with you like "run like a rabbit on a reefer breeze" or "go at each other like yard dogs over a soup bone." This is sharply in contrast with the language of Kimbrough, the white professor who's been searching for Johnson and whose every other sentence is a quote from Shakespeare.

Robert Johnson, though, may be the biggest metaphor of all. Everyone wants him to be something different. Kimbrough wants him to be the dirt-poor, cotton-pickin' emblem of the South that his records symbolize instead of the well-dressed and well-spoken man he is. Georgia, despite knowing his womanizing past, wants him as a lover. And Lem, Georgia's estranged husband, wants to prove his sufferance and manhood by besting Johnson.

So who is Robert Johnson? What do we learn about him? It's fascinating that in a play about Robert Johnson's last day, most of the conflict is created by those surrounding the legendary guitarist. Who's pulling who closer to death and destruction?

Johnson, played with slick charm by Aaron Alexander, rarely lets the characters and audience inside. Mostly he wants to be let alone – just to be himself. But the two or three moments that he does open up, that you begin to question what happened at the crossroads, say more than any of his fresh words do.

Director Marcus McQuirter's staging of Trick the Devil plays out like a Robert Johnson number: strong, sweet, natural, and full of longing. With some sharp performances, most notably Feliz McDonald's portrayal of Georgia, there aren't many finer ways to get the blues.