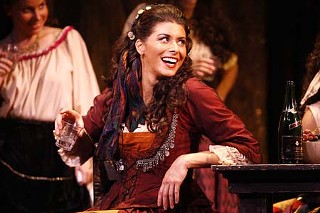 Spring has brought a fresh promise to the performing arts in the capital of Texas, and nowhere is this more evident than at Austin Lyric Opera. A new, hip logo and an impressive new website accompany the ALO's move to its new home at the Long Center, a transformation the company hopes to capitalize on dramatically with its new staging of Bizet's torrid, ever-popular Carmen.

Looking across at the Long Center's fly tower from ALO headquarters on Barton Springs Road, General Director Kevin Patterson took a moment to remark on the production. He acknowledged that his first encounter with Bizet's masterwork was through the soundtrack to the original version of The Bad News Bears, starring Walter Matthau and Tatum O'Neal. Many of us first came into contact with the work through classical music's foremost childhood ambassador, Bugs Bunny. More recently, Carmen was reworked for a Beyoncé Knowles-led hip-hopera. Indeed, the popularity of Bizet's melodies, steeped in exotic Andalucian folk tunes but at once unmistakably French, extends far beyond the opera house. This offers insight into the enduring popularity of the work, as well as a clever synergy with the Long Center's mission.

Entirely accessible in a field that struggles to attract younger and more diverse audiences, Carmen is a deft choice to inaugurate the ALO's new residence. Its popularity notwithstanding, Patterson senses that the work is well-suited for Austin audiences: "Opera is the ideal medium for experimentation, as it already comes with strong audience stereotypes." Given its unconventionality, perhaps Carmen will find a spiritual home right here in Austin.

When it premiered in 1875 in Paris, though, the opera scandalized French high society. A shamelessly sexual, uncapitulating free spirit had, of course, roamed the stages of opera by this time but never before as a woman. Perhaps what makes the story so alluring is how rare it is that a personality like Carmen's comes our way even to this day. All Patterson and I could produce as a current comparison was Madonna, and even so, merely the pop icon circa the 1980s.

The company is thrilled to have mezzo-soprano bombshell Beth Clayton inhabit the title role. At 6 feet tall, striking both in presence and vocal prowess, Clayton is a dynamic choice for opera's most famous libertine, as New York City Opera found when it had her fill the role in its production last fall. Alongside a cast that includes William Joyner, upcoming stars Barbara Divis and Luis Ledesma, and a good balance of Austin-based talent, Clayton brings great promise to ALO's first staging of Carmen since 2001, which took place a stone's throw from the Long Center in the now-demolished City Coliseum.

The venue and the production fit hand in glove. Celebrated for reusing a vast amount of original building materials to create something new and sublime, the Long Center is poised to host a fresh adaptation of one of the most frequently recycled and universally beloved operas.

In Bizet's inimitable "Habanera," Carmen sings that "love is a rebellious bird." Austin Lyric Opera puts this out as a challenge to Austin: If you haven't been to see an opera before, now is the time to break out of that cage. You might just fall in love.