The dancers in this performance evoke nothing so much as machinelike armatures slowly, intermittently, gorgeously going haywire 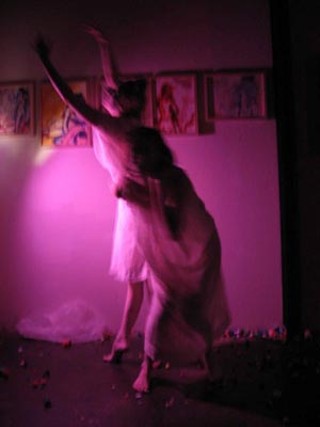 Bodies, it's often said, are biological machines. Flip the logic, and machines are inorganic bodies. The Austin Figurative Gallery concerns itself with living, human bodies. The visual artists who frequent this Eastside space run by the seemingly sleepless David Ohlerking concern themselves with capturing the images of such bodies in the fluid techniques of paint, in charcoal, in the varied media of nonphotographic representation.

Unframed examples of these portraits crowd the long walls of the AFG, providing a background against which, upon the floor's bare concrete smoothness, a trio of women performs permutations of the Japanese style of movement called Butoh. Ellen Bartel, Mari Akita, and Caroline Sutton Clark of Spank Dance Company: These are the women moving within the gallery's illustrated borders, performing a stark kinesis for themselves and for the tiny sprawl of people seated or squatting along the south wall.

One of the goals with anthroform robots is to bring the machines to a level where they can operate as easily as people in the human-scaled world, the better for them to perform more of the countless complex tasks that we accomplish so carelessly just a few years beyond the womb. Millions and millions of dollars spent; the industrial and scientific muscles of the Defense Advanced Research Projects Agency and Sony and Honda flexed toward fulfillment of this quest for smoothness and fluid precision of motion. And yet here, in the Austin Figurative Gallery, we have a performance where three human bodies are moving in a negative iteration of that quest, where these dancers evoke nothing so much as some machinelike armatures slowly, intermittently, gorgeously going haywire, becoming less and less recognizably human within their dysfunctionally costumed and partially disrobed bodies.

The Butoh performances of Spank Dance Company, which are irregular but not infrequent occurrences at AFG, last approximately 15 minutes from beginning to end. They are accompanied by a soundtrack of music mixed especially for Butoh, thumping and droning from a giant boom box high in one corner of the room. They are intriguing and memorable spectacles, requiring much solo concentration and, at times, intense and full-contact collaboration for the dancers. All they require from the audience is the willingness to be entertained by what's startling, interested in what possibilities of dance remain to be explored by humans in a world where more and finer motion is afforded to the ghost in each machine.