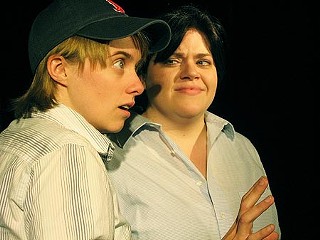 The title of the play is Matt & Ben, and yes, it's about exactly who you think it's about. But that may be the only thing you can anticipate in this comedy by Mindy Kaling and Brenda Withers. Set before the two struck Hollywood gold, it has the script Good Will Hunting drop literally out of the sky, already written, with their names on it, and it has both guys played by gals. In the original New York production, the authors took the title roles. For the local premiere, opening this week, Naughty Austin Artistic Director Blake Yelavich has cast two of his favorite actresses, Kelley Estes and Breanna Stogner, who, it must be noted, bear no physical resemblance to Damon and Affleck. But that's to the play's advantage, says Yelavich: "This is not a Saturday Night Live parody of the two, nor does it put them in a worshipped light or a two-dudes-who-just-got-lucky bitterness. It's about two people – who happen to be Matt Damon and Ben Affleck – on the verge of what we already know is a huge success for them. Kelley and Bree don't have to impersonate, just be. ... Be two aspiring young men from Boston."

How do Estes and Stogner feel playing such conspicuously well-known – and male – public figures? The Chronicle asked.

Austin Chronicle: Your feelings about the real Matt and Ben before you were cast?

Breanna Stogner: I knew them to be best friends – everyone knew that about them, and everyone knew that Matt was the serious one and Ben was the more charismatic one. I've always liked Ben Affleck more, and when I tell people that, they look at me like I'm crazy.

Kelley Estes: I didn't have any personal opinions one way or the other, except that when I lived in Cambridge, I was living in the same neighborhood that Matt Damon and Ben Affleck grew up in, and when they were in town, we would end up at the same bars. I also saw a whole lot more of Casey Affleck than I would have expected.

AC: Did you do any research to help you play these guys?

BS: My research is YouTube. You can find anything on YouTube. I looked up their Oscar speech, their good movies, and their bad ones. The only other thing I did was ask a lot of people, "When I say 'Ben Affleck,' what do you think of?" There's something very likable about him, and that's hard to get across. You can't teach that. It's hard to practice it. But I'm not playing his public self. I'm playing his private self. I'm all about how best friends act when no one else is around. That's the coolest part of the show.

KE: I watched a few Good Will Hunting scenes on YouTube, and I had seen Matt Damon's Inside the Actors Studio, but that's about it. This show isn't about us pretending to be Matt and Ben as the people they actually are or were; it's an approximation. This sudden rush of fame could happen to anyone, and instant acclaim is always jarring and unexpected. Everyone has the potential to be a product. Having women play these roles helps the audience think of them in a more universal light.