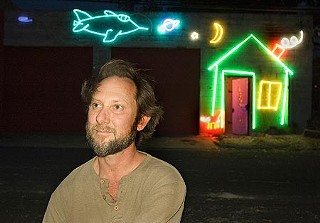 "It starts with a flower growing; then the house lights up. Then a rocket ship lights up over the flower, and there's a star and a planet, and the ship drops a bomb on the flower – which explodes. Then it all goes black, and the cycle begins again."

That's Ben Livingston, neon artist, talking about the large work of animated images that have brightened the front of his studio off Fifth Street for more than two decades. Soon, he'll be talking about it in the past tense: After 22 years of near-constant display, the electrified mural is coming down.

"My studio's been sold," says Livingston. "And, like the story goes too often here in A-town, yuppies are in, and art is out. I've got to be out of here by May 1, so I have to take the piece down between now and then. Megan Crigger, the manager of Austin's Art in Public Places program, would like to accept it as a donation – because she's interested in having it at Seaholm. So I'm hoping to find someone who'll buy it for that. Which may not be easy – it's been appraised at, uh, quite a bit of money."

A nice chunk of change for a bunch of gas and glass, but, of course, it's the inspiration and craftwork, not to mention the interest compounded by history, that make for true value among unique objects fashioned by human hands. The mural – an anti-war statement influenced by the art of Terry Powell, crafted by Livingston and his apprentices John Hayward and Leith Hartell, driven by Frank Roberts' jury-rigged computer program – fairly glows with such value and interest.

"I have some friends who were in town for South by Southwest Interactive, and the taxi driver who brought them over? He said he's been bringing his kids to see the piece for years. And sometimes when people come in from out of town – this guy's been driving for 14 years – they ask him to come here; it's on their list of things they want to see. I guess the image has gotten around: Ellie Rucker had it in the Statesman when it went up; the Chronicle chose it as a Best of Austin in '93; Holt Rinehart's used it in their textbooks. It has a definite history in the city; a lot of kids have grown up with it."

"I'm gonna get one of those trucks that has a sky bucket attached and just start taking it down one piece at a time," says Livingston. "My morale's kind of low right now. It's like going to work with cancer: You just go and do it. If we can't find a buyer, I don't know where it'll go – probably in some friend's garage." He shakes his head and chuckles, trying to look less despondent than he may feel. "This is definitely the unglamorous part of the art world."