Austin's strong improv scene is about to get even stronger, with a new training center and performance space

Tweet
print
write a letter
With two venues catering almost full-time to improv, three festivals on the calendar that spotlight improvisers, and three local troupes being selected to perform in the 2008 FronteraFest's Best of the Fest, the improv scene has never been stronger in our fair city. And luckily for Austin, it's about to get even stronger. This week sees the grand opening of the Merlin Works Institute for Improvisation and Gnap! Theater Projects Improv Season, giving Austin a third training center and performance space for the improvisatory arts.

The Merlin Works Institute and the Gnap! Theater Season are the brainchildren of veteran improvisers Shana Merlin and Shannon McCormick, who regularly perform together as the improv duo Get Up. The two companies will work in tandem, not unlike a music producer and a record label: Merlin, voted Best Improv Teacher by the Austin Improv Collective, will mold students and troupes at her school, while McCormick, who has previously produced No Shame Theatre and co-produced the Out of Bounds Improv Festival and Miniature Golf Tournament, will showcase the groups and style that the pair would like to promote.

The Austin improv scene has seen significant growth and change in the past few years, most notably from the arrival of ColdTowne from New Orleans following Hurricane Katrina. In less than two years, ColdTowne established its own theatre and began offering classes. Is Austin ready for a third improv school? Neither Merlin nor McCormick see any problem with the competition or overlap that another school adds. "As George W. Bush would say, 'We're trying to make the pie higher,'" McCormick explains. "We're trying to do things inside the community that other people aren't doing."

While offering short-form and applied improv classes, Merlin Works is hoping to corner the market on narrative long form, the specialty and focus of Get Up. Narrative long forms are akin to unscripted plays with structured stories linked by characters or themes. "People have a lot of misconceptions about what improv is," McCormick says. "Their only touchstone is Whose Line Is It Anyway? or some sort of bar improv, playing to the lowest common denominator."

"We've really been examining what we want improv to be," Merlin adds. "And we've made this curriculum up from scratch." The launch of Merlin Works and Gnap! Theater Projects allows Merlin and McCormick to teach their preferred style of improv, spotlight some of their favorite troupes, and influence new generations of Austin improvisers.

The Gnap! Theater Projects Improv Season really gets going Saturday, March 8, and will take place every second and fourth Saturday late-night at Salvage Vanguard Theater. McCormick and Merlin hope to highlight many of the local groups they love, such as Junk, the Frank Mills, the Knuckleball Now, and Girls Girls Girls. For the grand opening, Merlin and McCormick will perform as Get Up and will be backed by Parallelogramophonograph. That night, Merlin Works will offer special deals to register for classes, including Improv 101 classes, which start March 1.

Merlin and McCormick are hopeful about taking the next step for Austin's improv scene. "We're taking it slow," Merlin cautions. "But we're adding shows, classes are filling up, and eventually we'd love to be able to offer classes and shows every night." 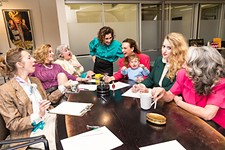