Theatre Action Project: A birthday bash for your inner grownup

It started as a class project by University of Texas graduate students trying to address violence in Austin Independent School District schools. But in the decade since, the Theatre Action Project has grown into one of the city's most valuable arts service organizations, connecting with 12,000 young people a year, primarily in Title I elementary, junior high, and high schools throughout Central Texas. TAP's 10 full-time employees and 35 teaching artists provide interactive afterschool programs addressing social issues, often working in partnership with organizations such as SafePlace, the Hope Alliance, the Bob Bullock Texas State History Museum, and the Webber Family Foundation. Now that TAP has 10 years of serving the youth of Central Texas under its belt, it's only natural that the organization would want to commemorate that milestone with a big birthday bash, but TAP's Big Kid Birthday Bash, to be held at the Design Center at Penn Field on Feb. 27, is a little more than just another party – and it's something new for the organization.

"This is the first year we've done a fundraiser," says Karen LaShelle, TAP's executive and artistic director. "We wanted to do an event that we felt reflected who we are, and since we work with young people, we thought, let's play on the theme of a kiddie birthday party, but let's do it for adults. So there'll be kidlike events, but everything will have a little bit of a twist. For instance, we have a ring toss, but instead of a ring toss for soda, it's a ring toss for wine."

The bash will be emceed by Jodi and Owen Egerton (of the Sinus Show) with live music provided by the ragtime jazz eightpiece ensemble White Ghost Shivers. Says LaShelle: "A lot of times adults will come watch our programs, or their children will be in our programs, and the parents will say, 'Gosh, I wish I could be having this much fun.' So here's an opportunity to have that kind of fun and also get a peek at what we do, because we also do a lot of spectacle work like parades and puppets, and you'll see some of that. We're going to have fire dancing and stilt walkers and jugglers. We're going to have fortunetellers and a cakewalk [with cakes from some of Austin's leading bakeries] and zany photo booths where you pop your face through and we'll take a Polaroid." The ubiquitous silent auction will offer vacation packages, local art, and jewelry; plus plenty of food will be available with a wine and beer cash bar.

Almost every arts organization out there is a nonprofit, and almost every one of them wants your donations. Of course they do: The live performance arts – theatre, dance, classical music – have been undervalued in this country for the almost half-century I've been kicking around, and bizarrely enough, our live music capital of the world sits near the bottom of the list of urban centers and private funding of the arts. Well, Austin, here's a chance to ease your collective artistic – and, more importantly, social – conscience by giving to what has to be one of the most worthy arts nonprofits around and have more than a little fun at the same time. What, exactly, are you waiting for? 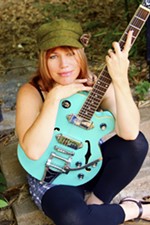 'Best of Times'
It's good to have friends