A heady, intelligent exchange between artist and critic about art's invisibility and criticism's illegibility 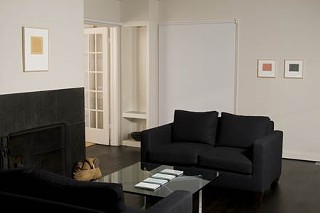 After a year's hiatus, Fluent Collaborative's Testsite is again in operation. Pairing Texas Christian University art historian Frances Colpitt with Fort Worth artist Terri Thornton, "Testsite 08.1" is a self-described practice in collaboration intended to complicate "the standard relationship between artist as creator and critic as interpreter through a process of exchange and response."

If projects can ever be said to "begin," this one began with a text by Colpitt titled "Ether," written around the idea of invisibility in response to, at least, Thornton's body of work and, at most, the phenomenological mysticism in 20th century abstraction. Literally drawing from Colpitt's text on the potential invisibility of a traditionally visual medium, Thornton turns the tables by creating work around the potential illegibility of art criticism, a traditionally read and written medium. In carefully planned and tiny movements, the four-piece series Ether(stuck), 2007 is a reproduction of "Ether" in four overtyped vertical lines, performed on the same manual typewriter that Thornton's father used to write his doctoral dissertation. In Ether(red reduced), 2007 and Ether(black reduced), 2007, the artist has condensed and de-spaced the critic's essay in colors correlated to the works' titles, while formally engaging and referencing its content, including works by Kasimir Malevich and Ad Reinhardt. Colpitt's essay is made almost entirely unreadable as text and highly visible as form. While thematically cheeky and clever, Thornton's slips between the potential invisibilities of art and the illegibilities of criticism are so beautifully executed that words shift from their common role as communicative tools to hypervisualized marks, formally presented as objects and image.

There is a provocative stutter, however, in the site-specific installation, which can be read in at least one of two ways. In Ether(excerpt), 2008, Thornton lifts a direct quote from Colpitt's writing – "pure unspeakable content" – and renders it in pinpricks within a gesso-defined square on the site's wall. If this piece is thematically in keeping with the rest of the exhibition, flipping the invisibility of art and the illegibility of art criticism, then the work trips off theme as the unspeakable, and the illegible are elided.

This Testsite is, true to form, heady, intelligent, and something of a private conversation between artist and critic, to which we as viewers are privy. From this angle, Ether(excerpt), 2008 may be Thornton's most direct response to Colpitt's essay specifically and to art criticism generally, as the saying "death by a million pinpricks" gives this patient and serenely executed work a more aggressive reading.