'Marathon': Down the jackrabbit hole

Where else to workshop this new musical drama by Jesse Sublett and Darden Smith than the Continental Club?

New plays get developed in Austin all the time, but not that many that get a hearing at the Continental Club. Believe it or not, that venerable music venue – or at least its upstairs art gallery next door – is the place where the new work Marathon is in the midst of a series of workshop performances, and it's as fitting a venue as you could find for this new musical drama by Jesse Sublett and Darden Smith. These two guys have logged enough time making music on club stages to call them their second homes. This collaboration for the so-called legitimate stage – which has been commissioned by the University of Texas' Performing Arts Center and is being directed by UT Department of Theatre & Dance professor Richard Isackes – features a script by Sublett that draws heavily on the drama of the ancient Greeks, but don't let that scare you. It's set in present-day West Texas, where a Boston slacker has come to learn more about the dad he never knew. And in doing so, he finds himself down the jackrabbit hole, in a sort of Wild West wonderland of mechanical-bull-riding tournaments, talking armadillos, and rabid devotees of six-man football, a sport in which his daddy was apparently a gridiron combo of Achilles and Theseus. His hero's journey, told mostly in first-person narration, is periodically punctuated by songs that Smith has written that not only do a lot to deepen the Texas atmosphere but, performed with full band, give the show an electrical charge. Conflict of interest alert: Sublett has not only written for the Chronicle many times in the past, but his wife, Lois Richwine, is a longtime ad rep for the paper, and this writer's wife, Barbara Chisholm, who is also a Chronicle writer, is appearing in the workshop performances. That said, this is really about two prominent local artists developing an unusual new work in an unusual venue for a major arts presenter. Fans of locally generated new plays owe it to themselves to see what these guys are up to.

The workshop version of Marathon will be performed Sunday, Feb. 10 & 17, 8pm, at the Continental Club Gallery, 1315 S. Congress. Admission is free. 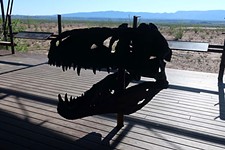 After a Fashion
In between TV marathons, Stephen Skip-Bos to his Lou all over town at the functions he can still make it to