In the Gallery 68 show, the artist posed as a serial killer being executed for his crimes 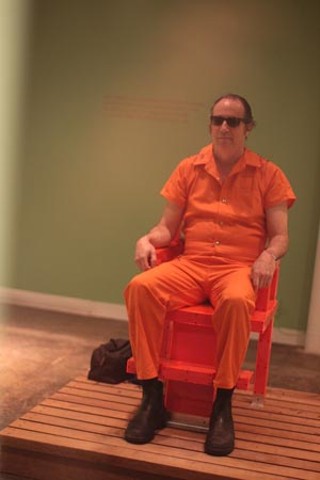 Hills Snyder is a sort of mythic, historical creature fascinated with folktales that involve the human psyche. He has even altered his own biography to cause more confusion and ambiguity over his persona. His bio on his website reads that he is 55, and it is widely believed that he was born in Lubbock, though some say it was on a mountaintop in Tennessee. He has lived in a string of small towns throughout his life, including Miles City, Mont.; Oskaloosa, Kan.; and Helotes, Texas – some of which is true and some of which creates more mystique surrounding him and his whereabouts.

Each project he does contains an element of surprise coated with the suspense of anticipating the direct experience of an opening performance or first-time viewing. Snyder's latest project occupies one of the smallest gallery spaces in Austin, Gallery 68, located inside the Flatbed Press building. It presents Snyder as a serial killer wanted for the murders of 16 victims – all of them curators, writers, collectors, or supporters of his work. The opening for the exhibition included a performance in which Snyder was brought into the gallery by the "head curator" (San Antonio artist Nate Cassie), who was to execute him in a pink Plexiglas chair in the center of the gallery – the chair having been taken from an installation that Snyder created at Artpace in San Antonio. In the gallery were photographs of his victims, along with a quote on the wall and a note from a viewer who disliked the Artpace installation. Snyder describes his victims as "being found next to torn pages from an open-heart-surgery manual; with the cause of death unknown and each body discovered in their home, fully dressed and even smiling." One of his "victims" is San Antonio artist and patron Linda Pace, who recently passed away after a long battle with cancer, which makes the concept that the people in these photographs are dead seem that much more real. Another ironic tidbit: The "execution" was really a haircut performed in the pink electric chair; condemned prisoners did have their heads shaved before they were electrocuted.

"All Good Children" relates to another exhibition that Snyder did at Cactus Bra Space in San Antonio, the creatively titled "Son of Samson," which combined Son of Sam, the serial killer from New York City, with the biblical hero Samson, whose hair was the secret of his strength. Both treated the exhibition space as more of "a philosophical crime scene" than a typical layout. Both took place in a small, cubelike space with one small doorway entrance. Both featured the same two characters: the barber (a man dressed in black, wearing black sandals, with the words "head curator" in "biblical" old English letters on the back of his shirt) and Son of Samson (long, dark hair, dressed in white, wearing brown sandals and eyeball cuff links). At the end of the Cactus Bra performance, Cassie, the executioner in both performances, led Snyder blindfolded to a bathroom, then led the crowd to a show he curated that opened the same night as "Son of Samson." Similarly, at the end of the performance in Austin, there was a wake that drew people to Brad Tucker's show at Art Palace. Snyder enjoys the idea of transportation, both physical and metaphorical. Hence, at the wake he reappeared, dressed in a spiffy, orange suit with sunglasses on.

Snyder has said that he thinks of the "body of work" more like "digging up bodies rather than working on a body of work." Perhaps each piece is a clue to the ambiguous narrative that Snyder is weaving using art as his weapon while posing as a sociopath. Maybe this was Snyder's way of killing off the character himself? Possibly, though the character keeps re-emerging in different forms. Snyder says his first appearance was most likely in the 1998 Sala Diaz show titled "Neil Diamond's Greatest Hits." While I did not see it, judging by the invitation (Snyder in sunglasses with a single red rose in hand, a voluptuous woman in a red dress on the right, and an image of the first moon landing in the background), it would seem not to disappoint. Snyder has a way of weaving pieces of the obtuse narrative through each exhibition. He speaks of the work like a hook: "You can hang something on it, or not."

'LeWitt x 2'
Austin Museum of Art's exhibit is successful in revealing nuances of LeWitt's work, but less so in showing art by his peers