see.hear.speak.three: They said 'yes and' and had a festival

ColdTowne's comedy fest grew out of the fundamental improv principle of saying, 'Yes, and ...'

Tweet
print
write a letter
Anyone paying any attention at all to the Austin comedy scene over the last couple of years couldn't help but notice ColdTowne. In 2006, it won the Chronicle "Best of Austin" Readers Poll award for Best Improv Group and in 2007 received the B. Iden Payne Award for Outstanding Improvisational Theatre Ensemble and the "Best of Austin" award for Best Comedy Troupe. While these accomplishments are impressive all on their own, they take on even greater significance when you consider that ColdTowne wasn't anywhere to be found in the Austin area in mid-2005. "We started out in New Orleans," says Michael Jastroch, one of the five people who officially make up ColdTowne, "and we kind of washed up here after the hurricane, which seems to be the story that's going to be perpetually written about us for the rest of our lives, no matter what."

While the ColdTowners, like so many local comedians, started out working wherever they could, they managed to quickly establish themselves in their own venue on Airport Boulevard and 48½ Street, right next to I Luv Video. "Opening our own space was something we all decided we wanted to do when we got here," says Jastroch. "Fortunately, Tami Nelson, who's in the group, lived here for a number of years before she moved to New Orleans, so we had contacts with the people that owned I Luv Video and also Spider House. They helped us out a lot in terms of finding the space and helping promote us. That's one of the reasons we stayed in Austin, because people are so eager to promote the arts. We opened the theatre a little over a year after we moved here, but we were doing events at the Space, that's now the theatre, before that."

One of the events they did was a little festival called see.hear.speak. Says Jastroch: "An underlying rule of improv is to 'yes and' each other. For instance, you say, 'Look; I have an apple,' and I'll say, 'Yes, and the apple is green.' That's one of the fundamental building blocks of an improv scene, which, in a metaphoric sense, translates to the rest of our lives." In the case of see.hear.speak., the ColdTowners yes-anded themselves into a popular comedy festival. "Someone said, 'Hey, let's do a special event,' and then we just kind of kept yes-anding each other and making it into a bigger thing, and eventually see.hear.speak. was born."

The festival, spread across three nights, breaks down into one night of "see" (comedy with video), one of "hear" (comedy with music), and one of "speak" (comedy in a solo format). This year, for the first time, the ColdTowners are flying in acts from around the country, including Jill Bernard, who'll perform in both "hear" and "speak." "In the improv world, Jill is kind of an icon," says Jastroch. "She's teaching a bunch of classes on Saturday [Jan. 26] during the day. Last year, that was a little fantasy dream we had of actually bringing in people we like to perform for an Austin audience. And to be able to actually pull it off this year is really exciting. And we're throwing a fairly large afterparty after 'speak.' Someone yes-anded and got a bunch of sponsors, so we'll have free food and probably some drink specials and all sorts of crazy stuff."

see.hear.speak.three runs Thursday-Saturday, Jan. 24-26, with shows at 8 and 10pm, at Cold-Towne Theater, 4803-B Airport. For a complete listing of acts and events, visit www.coldtownetheater.com. And make sure you get your tickets early. Seating is extremely limited. 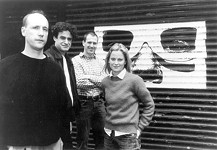 ColdTowne: Getting Upright with the originals
Core members from cult comedy troupe Upright Citizens Brigade raid Austin for the first time since 2000