After 70 years, Zach creates a Porgy and Bess for Austin

Porgy and Bess is often considered America's first significant addition to the opera canon, the masterpiece of one of this country's greatest composers at the height of his artistic powers and popular success – a 3½-hour epic that is both accessible and sophisticated, satisfying but enigmatic. A love story set in a fictional tenement on the waterfront in Charleston, S.C., Porgy and Bess has found new audiences in each of the more than seven decades since its creation.

The star-studded audience at the show's Broadway premiere in 1935 was full of names we still recognize: Joan Crawford, Katharine Hepburn, Virgil Thomson, Ben Hecht, Jascha Heifetz, Paul Whiteman, and Condé Nast, to name a few. Todd Duncan and Anne Brown took the lead roles, and it helped make them stars. Due to the incredible cost required to keep the huge production open, the initial run closed after a respectable but unremarkable 124 performances. Just a few years later, though, the show was retooled and reopened to greater success, eventually leading to national and European tours and worldwide acclaim.

With each decade, the piece has been renewed and reborn. The Forties brought international recognition; the Fifties brought several key recordings of reinterpretations and the release of the Sidney Poitier film. In the 1970s, after decades of stubbornly ignoring it, the opera establishment finally accepted the work, with a full production by Houston Grand Opera, and in 1985, the Metropolitan Opera put its stamp of approval on the piece with its entry into their repertoire. Now, in the 2000s, Porgy and Bess meets the Zachary Scott Theatre Center, with Artistic Director Dave Steakley reinventing the work from a jazz/R&B perspective. Austin-based composer and orchestrator Greg Bolin is providing new instrumental and vocal arrangements, while music director Lyn Koenning provides additional music for this new, shortened version of the classic.

Of course, the story is not really so simple. Porgy and Bess has been surrounded by controversy throughout its life span, and any new production raises some of the same questions. For many people, these controversies are long resolved; for others, they may never be.

Despite the accolades and hype associated with George Gershwin's score, Porgy and Bess encountered rockiness from the beginning. During the opera's development and after its premiere, accusations of racism arose around the piece. Actors refused to take parts in it, and prominent African-American voices wrote and spoke in protest against it.

Director Steakley explains that "original cast members had concerns that their characters played into a stereotype that African-Americans lived in poverty, took drugs, and solved their problems with fighting. At that time, there were very few positive depictions of African-Americans in plays or films, and those roles were generally restricted to house servants, tap-dancing entertainers, or low-life characters. When a community is working so hard to achieve equal rights, every artistic depiction before the people holding the power becomes very important in order to create positive change." Harold Cruse, professor of African-American studies at the University of Michigan, called Porgy and Bess "the most incongruous, contradictory cultural symbol ever created in the Western world."

All the primary creators were white: composer George Gershwin; his brother Ira, who contributed to the lyrics; DuBose Heyward, who wrote the original novel, Porgy, and most of the opera's libretto and lyrics; and his wife, Dorothy, who first adapted the novel to the stage. As almost all the characters and cast members were African-American, the question of cultural thievery and exploitation followed almost automatically.

Not all response to the work was negative, however, and some in the African-American community found promise and opportunity – and even progressive politics – in the piece. The opera brought African-American artists onto stages they had never been allowed to grace and in numbers never before seen. (Gershwin stipulated that the show couldn't be cast with white actors; he didn't want it to become a blackface minstrel show.) And in at least one example, the production forced a change in the segregationist policy for audience seating, starting with the National Theatre in Washington, D.C. As for the piece's social commentary, historian John Hope Franklin wrote, "[The drug dealer] Sportin' Life clowns but not for white audiences. Porgy's clowning is a deliberate frustration of white power. Porgy also plays Uncle Tom, but he is never servile and lives for no white master."

For better or worse, the questions of racism and racial politics will likely always live with Porgy and Bess. But even so, the opera's artistry continues to move and inspire audiences.

An Opera or Not?

The question of whether or not Porgy and Bess was truly an opera, as the creators called it, created a second controversy around the work. As Steakley puts it, "Porgy and Bess is a hybrid of musical theatre, folk songs, spirituals, Tin Pan Alley popular music, jazz, and opera. Because it is not 'pure' in its form, it is not considered by some to be an opera." After all, the initial production took place in a Broadway theatre, not in an opera hall. When the work was revived on Broadway in 1942, the operatic aspects were cut back and spoken dialogue was inserted between songs, making it more like a musical than an opera. (And that production was more of a success than the original, playing 286 performances and getting revived on Broadway twice more over the next two years.) Most major opera companies did not touch the piece for decades, and when they did, it was considered a big deal. But the original version is a stage narrative, sung though, not with songs between spoken dialogue, traditionally considered the key difference between an opera and a musical. Additionally, classical Western opera singing style was applied, even with the songs based in other styles.

Gershwin realized that his work didn't fit into preconceived categories, explaining to The New York Times that "because Porgy and Bess deals with Negro life in America, it brings to the operatic form elements that have never before appeared in opera, and I have adapted my method to utilize the drama, the humor, the superstition, the religious fervor, the dancing, and the irrepressible high spirits of the race. If I have created a new form, which combines opera with theatre, this new form has come quite naturally out of the material."

From Opera to Musical Theatre

For the creators of the Zach Scott production, the issue is decided: Both Steakley and Bolin consider the original Gershwin Porgy and Bess to be an opera. Ironically and boldly, they are removing the operatic elements and transforming the work into a piece of musical theatre. For Steakley, this production is as rooted in famous interpretations of the music as the original Gershwin score: "In 1997, I directed a production of Dreamgirls for Zach at the Paramount Theatre, and after a performance, my friend Joe York said to me, 'You should really tackle Porgy and Bess next because you have assembled the talent to pull it off.' I was not very familiar with the opera, and even though I knew some of the music, I didn't know the story at all. So I started digging, and being a soul music fan, I was delighted to discover that Ray Charles and Cleo Laine had made a wonderful recording of Porgy and Bess. It became for me a perfect introduction to this beautiful score. Digging deeper, I discovered Nina Simone's moving recordings and the wonderful recording made by Ella Fitzgerald and Louis Armstrong. These recordings became my window into this terrific music by George and Ira Gershwin. My dream was that we would create a version of Porgy and Bess that was inspired by these legendary recordings I have grown to love so much." Last November, he hired Greg Bolin to combine the original score and the re-recordings and create a new version of the piece that also held together on its own. (See "Greg Bolin: Non-Austin Austin Composer," p.36.)

Steakley's vision of a rescored version of the opera from a jazz/R&B angle is in line with his ongoing efforts to develop Zach into a theatre that stages ambitious projects not just exciting for Austin audiences but worthy of attention on the national theatre scene, shows such as The Gospel at Colonus, Angels in America, The America Play, Jouet, The Laramie Project, and Keepin' It Weird. But because this concept of Porgy and Bess originated at Zach, it has greater potential to draw interest from around the country. The project has already earned Zach a $40,000 American Masterpieces grant from the National Endowment for the Arts, and more national attention may be coming.

Messing with a classic is always a risky proposition, as these creators realize. Revisions have been tried many times with Porgy and Bess, not always with satisfying results. But making a piece one's own is also a tool for revitalizing and personalizing a piece while preparing it for a new audience. Dave Steakley is Austin's most established and acclaimed director of musicals, Greg Bolin adds a powerful and intelligent musical voice, and the cast, featuring David Jennings and Marva Hicks in the title roles, is stellar. The opportunity to see this 20th century classic staged is rare. To see it created by this exceptional Austin team is a privilege. 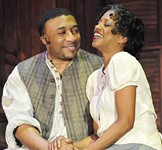 'Porgy and Bess': Lawd, it's on its way
Despite some offstage storms, Zach's production made a big splash – and may win a second life