The stunning art collection of the Dell Children's Medical Center 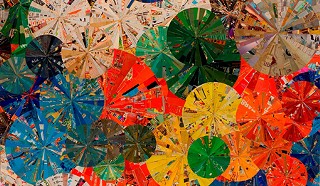 Hospitals can be scary places, especially for ill or injured children and their families, and, as I understand it, many people find art museums almost as intimidating. But fear gives way to wonder when patients and families enter the new Dell Children's Medical Center and stop to turn the knobs of the loopy, multisensory, hands-on contraption that greets them. Most of the moving parts of this walk-in-closet-size audio/kinetic sculpture by 83-year-old New York artist George Rhoads are contained in a see-through box with a Ferris-wheel-shaped component towering on top. All eyes, young and old, follow the rubber balls that drop and roll along Rube Goldbergian routes past chutes and ladders and animal cutouts. Similar works by Rhoads can be found from Philadelphia to Los Angeles in airports and children's museums and private collections, and now Austin has its own.

And that's not the only artwork you'll find in Austin's newest hospital. The Children's Medical Center is filled with prints, drawings, photographs, sculptures, ceramic murals, and brightly colored, stitched fabric tableaux. Works may be found in every lounge, conference area, and patient's room (including individual emergency rooms), and while the mix includes art posters, original, unique, and limited-edition works predominate. Pieces by acclaimed artists such as Donald Baechler, Jennifer Bartlett, Chris Burden, and Jose Luis Borges (and those are just some of the names that begin with "B") mingle with lesser-known but equally interesting talents. To date, upward of 800 works have been assembled at a cost of roughly $900,000, 20% of which came through discounts and donations.

"This is the [city's] largest public art collection outside of a nonprofit institution," says art consultant Sandra Gregor. Gregor speaks with an authority born of her experience working at Laguna Gloria Art Museum and the Texas Commission on the Arts and serving as executive director of the Texas Fine Arts Association (now Arthouse) from 1983 to 1997. As a paid consultant for the Dell Children's art committee, she spent the past 2½ years surfing the Internet, traveling to galleries and artists' studios, and guiding the committee through Friday afternoon PowerPoint presentations. While she makes no claim to competing with the Blanton or the Austin Museum of Art, Gregor says that "in terms of any collection that the public can access, I can't think of a better one." To verify that claim, one needs only to measure the collection against the goals that the hospital set for itself and to consider the unique role of art in health-care facilities. 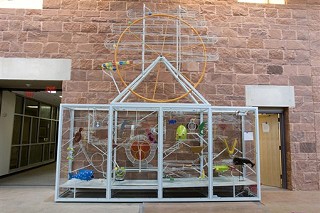 "We wanted [the art] to be uplifting, to be positive, cheerful, and visually dense," says Gregor. That idea was in line with a landmark 1984 study by Roger Ulrich from the Texas A&M School of Architecture and a board member of the Center for Health Design, which showed that patients whose rooms provided a view of trees recovered more quickly, used less pain medication, and suffered fewer complications from surgery than those whose rooms looked out at a brick wall. Common sense and subsequent research expanded the findings to show statistically significant correlations between reduced recuperative times and the environment, exposure to light, and art. So Dell Children's was designed to provide a soothing environment for visitors as well as staff. Throughout the complex are six unique gardens representing the six specifically identifiable ecosystems found within the 46 counties that make up the hospital's service area. The color palette from those gardens continues inside the building, where walls are bathed in natural light and filled with art.

"Nature in many dimensions flows throughout this hospital," explains Gregor, who received blueprints from the architect marked to show where the art should go. In a museum – whether the Museum of Modern Art in New York or AMOA in Austin – such determinations are art-driven, and a gallery's ambience may shift from exhibition to exhibition, but at Dell Children's, art and architecture work together to maintain a stable, nonthreatening environment where spiritual and physical healing can occur. If those pictures could sing, you'd be listening to "Here Comes the Sun" by the Beatles rather than Black Sabbath's "Neon Nights."

Art in a hospital engages with viewers on a very different time frame than in other settings. Visitors to museums or galleries spend, on average, only seconds with each individual artwork. People who go to a hospital may remain there for hours and sometimes return day after day until a patient's outcome is determined. The art hasn't brought them in, and it isn't the reason they stay, but it has an extended opportunity to bond with, distract, entertain, and even soothe its audience. For this reason, it's useful to have art that is visually dense, that is, layered in ways that visitors can find something new and potentially reassuring each time they return to it. The ultimate exemplar of this in Dell Children's is the 9-foot-by-12-foot framed collage by Austin artist Lance Letscher. Maneuvered through a hospital door with barely an inch to spare, the behemoth collage looms above a row of chairs in a large waiting area on the second floor. Comprising a series of overlapping pinwheels made from children's books – The Pokey Little Puppy and several Walt Disney titles are among the many represented – it offers viewers an opportunity to invest time in searching for bits and pieces of favorite bedtime reading material or to take refuge in the comfort of the soft palette and engaging patterns.

Much smaller but similarly complex is Pamela Nelson's Rose Window. The brightly painted wooden discs placed around a large, sunlike center look something like variations on the game Chinese checkers. Nearby, an azure-toned photograph of a tree by Christopher Burkett (he used to be a monk and now feels that photography is his spiritual expression) and silk screen by Pat Steir (a New York-based printmaker whose abstractions often evoke images of cascading water) provide more sedate, though no less layered, focal points. Ten small ink-and-gouache drawings by California artist Amy Jean Porter, a series titled Tiny Horses Say What, illustrate the ability of art to be childlike and yet not childish. This is a collection that does not talk down to its audience, even as it shows them a good time. 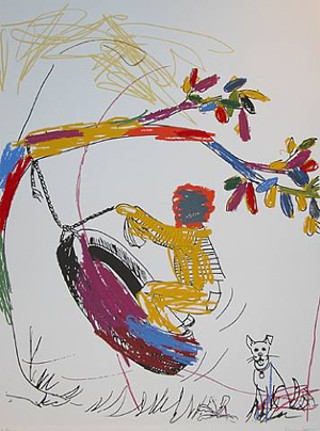 Bonar credits his dedicated art committee with responding well to the hospital's needs, which included the preservation of traditions established at the prior site. When Bonar wanted to use hundreds of acoustic ceiling tiles that patients in the old Children's Hospital had painted but declined to install the deteriorating tiles in the ceiling of his new $200 million building, the group found an innovative solution. Many of the images were scanned into a computer, reformatted (from rectangular to square), enhanced with the background color, printed on 24-inch-by-24-inch Plexiglas, and framed so that images could be changed out over time. These pictures, especially the ones produced and signed by chronically ill children who returned often to the hospital, have special resonance for staff who knew them.

Members of the community at large also contributed to the acquisition of art in all its forms. Dr. Erik Pronske, a practicing anesthesiologist and accomplished photographer, donated enlarged photographs of individual Texas wildflowers to the hospital's collection. In response to a suggestion from within the art committee that a space should be found for musicians and other performers to entertain children, a small amphitheatre was created near the hospital entrance, thanks to a $1 million gift from HEB. Local philanthropists Betty and Bill Nowlin chaired an event at Volitant Gallery for the Children's Medical Center Foundation of Central Texas, raising more than $42,000 in one evening to purchase art selected by the committee. Bill Nowlin donated his own intensely colored photographs, as well.

And that huge George Rhoads sculpture in the entry lobby? Carousaball, as it's titled, was made possible by a generous gift from Barbara Paul, a member of the Children's Medical Center Foundation of Central Texas board of trustees, and her husband, Carl, in honor of their daughters, Beth Rinke, Kelly Redding, and Marnie Paul. The Pauls' interest in the Children's Medical Center began when Marnie, who has cerebral palsy, had several surgeries at the old site. "It was important to me to support a hospital where she got such great care," says Barbara Paul, who acknowledges that the old facility had considerably less art than the new one has. "It really pleases me that it's affecting so many people, entertaining so many children. It was just our pleasure to do it." And for those of us who are afraid of hospitals, she adds, "They couldn't have put it in a better place. ... It kind of takes your mind off what you're there for."

One has only to watch as children and parents alike interact with the Rhoads sculpture to understand that this collection accomplishes its mission. 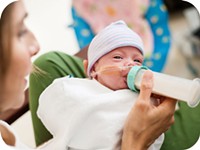 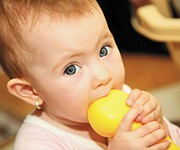 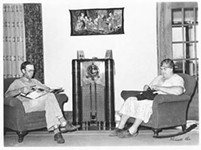