This Argentinean artist's work may not grab you immediately, but its understated lyricism will linger 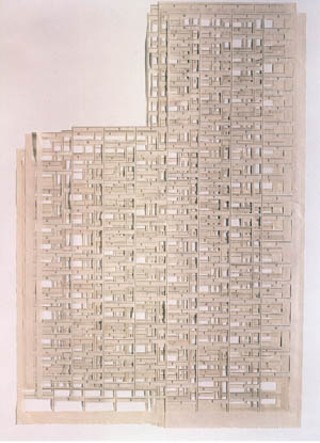 Blanton Museum of Art, through March 16

Blanton Museum of Art curator Gabriel Pérez-Barreiro surveys a little more than 15 years of Jorge Macchi's art with "The Anatomy of Melancholy," a spare exhibition that positions the artist as creating a "third space" between conceptual art and expressionist painting. More than 40 pieces in collage, sculpture, photography, and video provide the first comprehensive overview of Macchi's work presented in the United States. Originally organized for the sixth Mercosul Biennial in Porto Alegre, Brazil, the show stops in Austin before heading to the Centro Galego de Arte Contemporánea in Santiago de Compostela, Spain.

The formal simplicity of Macchi's work may draw comparisons with conceptual art, but it also brings to mind the poets Charles Baudelaire and André Breton, among other observers of the modern city's utter strangeness. Like the poets, Macchi explores the power of chance operations, the revelations of aimless walks, and – as the exhibition title suggests – the melancholy of everyday life.

Take Buenos Aires Tour, an artist book produced in collaboration with the writer María Negroni and the composer Edgardo Rudnitzky. Macchi allowed the lines of a broken glass to dictate the tour's itinerary through Buenos Aires, the artist's hometown. Texts, photographs, and sound illuminate points along each path, which draw eight jagged lines across the map. The virtual tour, explored largely via CD-ROM, eschews typical tourist sights in favor of banal spaces. In the spirit of Baudelaire's flaneur, it's a particular kind of stroll through the city: one not meant to reach a specific destination but taken simply for the sake of experience.

Other pieces evoke the city's alienation as much as they comment upon the human condition. A series of newspaper obituary notices, cut so that only a black frame topped with a cross remains, is collaged into a pile that resembles an apartment building in Monoblock (Tower Block) – an elegant memento mori. Vidas Paralelas (Parallel Lives) combines two panes of mirror glass broken in exactly the same places, with identical fragments removed. A manufactured coincidence, the broken mirrors nevertheless suggest loneliness and isolation, since two parallel lines (or lives) never meet.

Existential questions are balanced by a more playful mood elsewhere in the exhibition. The video Caja de Música (Music Box) features a stream of cars shot from above, with the camera positioned on a highway overpass. Macchi assigned a musical tone to each lane, which sounds every time a car passes through it. The result is an automotive tune that transforms traffic, a typically depressing feature of the urban landscape, into a delight.

"The Anatomy of Melancholy" has some rough spots: Two videos that draw on the conventions of film – La Flecha de Zenón (Xeno's Arrow) and Fim de Film (End of the Film) – complement each other but ultimately fall flat. And as one critic noted a few years ago, it is easy to overlook Macchi's work. His art is not spectacular. Macchi barely employs color. Often, his pieces are relatively small. Yet the artist has built a body of work rich in other ways. It may not grab you immediately, but such understated lyricism will linger.