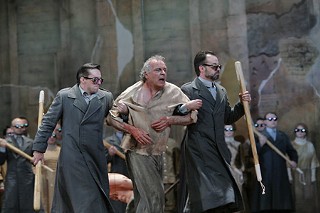 1) Waiting for the Barbarians (Austin Lyric Opera) Mounting the American premiere of a new opera by Philip Glass in Austin was a coup for ALO, but what made this a still greater achievement was the production's enveloping atmosphere of suspense and impending violence, which spoke powerfully to life in a time of oppression and terror. A timely call to recover our humanity, stunningly realized and anchored with expansive humanity by baritone Richard Salter.

2) Crossing the Divide Closing Gala Concert (Conspirare, et al.) How often are we blessed to hear hundreds of voices bound together in song and a love of song? The grand finale of Conspirare's National Endowment for the Arts-funded symposium on American music saw 14 choirs massed in the Riverbend sanctuary, and their voices lifted together was a mighty joy, as expansive as our nation's spacious skies and as stirring to the heart.

3) Faces of America: The Light (Miró Quartet) Pushing beyond the holy trinity of Copland, Gershwin, and Sousa, the UT School of Music's resident string quartet assembled a program of musical works that evoked the best aspects of our national character – our openness, our industry, our optimism – and performed them with a spectacular virtuosity matched by an exuberant intensity.

4) Illumination (Blue Lapis Light) Venturing indoors for the first time in years, site-specific choreographer Sally Jacques, her team of trusted designers, and her amazing corps of aerial dancers transformed the massive beams and vast emptiness of the decommissioned Seaholm Power Plant into a grand temple, a sacred space in which the spirit was free to soar toward heaven.

5) The King & I (Forklift Danceworks) In a comeback special to rival Elvis', Allison Orr's choreographic tribute to the man, the legend, rocked even harder than in its earlier versions. Dancers Orr, Theresa Hardy, and Ann Berman channeled the King in all his signature moves – as did Presley impersonator Donnie Roberts – and, with wit and heart, revealed the connection to Elvis in all of us.

6) The Odyssey (Austin Children's Choir) Adapting the heroic saga into an hourlong choral piece for kids was its own amazing journey, but composer Graham Reynolds, librettist Beverly Bardsley, and choir Artistic Director Kathleen Turner brought the epic by Homer home with a skill Odysseus would have envied. A splendid adventure, sailing on captivating rhythms and melodies and the choir's very fine singing.

8) Threshold of Night: Music of Tarik O'Regan (Conspirare) Artistic Director Craig Hella Johnson has found a kindred spirit in young Brit composer O'Regan, and in the season opener, given over entirely to O'Regan's work, he guided his company of voices to moments of ecstatic joy and serene stillness that proved O'Regan's worth as a composer and let us hold infinity in the curl of our ears.

9) Expressions/Lingo (American Repertory Ensemble) Both programs by this ambitious company balancing chamber music and dance offered double the pleasure, double the fun of many concerts in either discipline, the latter owing to the dazzling craft of performers in executing exacting works (Balanchine, Brahms, et al.), the former to the playfulness of the modern dances and co-founder/choreographer David Justin.

10) Flash Dance (Kathy Dunn Hamrick Dance Company)/Dolly Would (Getalong Gang Performance Group)/Night of Spank Dance Company (Hot September Flurries) In an exceptionally fine year for Austin's independent choreographers and smaller dance companies, these three shows – a program of 30 dances in 60 minutes, a giddy tribute to the music and philosophy (!) of Dolly Parton, and a sly look at group dynamics among a few identically dressed women – proved especially well how inventive and playful local dance makers are and how exhilarating they make it to watch.

Special Honorable Mention: The Souls of Our Feet (Tapestry Dance Company) The program of meticulously re-created tap routines from classic films and vaudeville – No. 2 on our Top 10 list for 2006 – was revived in March and proved every bit as delightful and awe-inspiring – and an achievement for Tapestry – as in its debut.