In founding the Austin Figurative Project last year, artists Chris Chappell and David Ohlerking raised the profile of traditional painting in Austin. Their Eastside gallery mounts rapid-fire exhibitions of work by member artists, who paint quickly from live models. Two painters working from the same subject can end up with radically different canvases, a circumstance that highlights each artist's particular style. This is the premise behind "Double Vision," Chappell and Ohlerking's two-person show at Davis Gallery.

Take the two paintings of Third & Chicon, where Austin Figurative Gallery is located. Both artists paint in oil on Masonite, which gives their work a baseline similarity. But in addition to their common subject matter, the similarities end there.

As is evident throughout the show, green and brown hues – dappled generously with white highlights – dominate Chappell's palette. His dynamic brushwork flows toward a vanishing point located two-thirds up from the bottom of the support, where sky and street meet in a haze of parked cars, asphalt, and yellow-green grass. The effect is comparable to the blurs of time-lapse photography; longer brushstrokes appear similar to the streaks of light generated by traffic in motion. 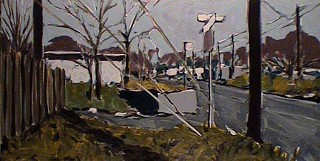 A striped crosswalk and a line of telephone poles help us to map Chappell's painting onto Ohlerking's, but the perspective is slightly different. In Ohlerking's painting, we see one less telephone pole and a fire hydrant surrounded by a spit of grass. It's as if the two artists worked side-by-side, slightly altering their respective points of view.

Ohlerking uses heavy outlines that make obvious his influences, including Edvard Munch and Henri de Toulouse-Lautrec. This technique gives his paintings a jewellike, cloisonné appearance. Brighter colors govern a more limited palette than Chappell's, with blocks of pink, red, and green paint making up most of his streetscape.

The differences between the two paintings of Third & Chicon reveal two divergent "visions" and prompt a series of questions fundamental to art and its history: Where does an artist's style come from? What factors condition his peculiar way of viewing the world? And what might make one painter's painting more appealing to a viewer than the other? Here, the last question probably amounts more to personal taste than anything else; this viewer leans toward Ohlerking, but you can decide for yourself.