For this active Austin actress, there was something special about Refraction Arts' hillbilly/kung fu/rock & roll 'Hamlet' 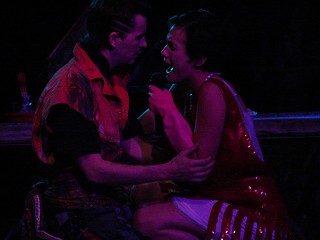 Jeffery Mills and Adriene Mishler in The Assumption

Just over a year ago, The Assumption opened at the somewhat hidden and more than a little mysterious Blue Theater, behind the Goodwill center on Springdale Road. An original hillbilly/kung fu/rock & roll take on Hamlet produced by Refraction Arts Project, the show went on to be named the season's outstanding musical (B. Iden Payne Awards) and outstanding comedy (Austin Critics Table). "To be perfectly honest, we were all so surprised that this low-budget, ridiculous, collaborative adaptation of Hamlet got recognized to the extent that it did," says Adriene Mishler, who plays O'Lilah, The Assumption's Ophelia. "First of all, the fact that we even had houses, let alone sold-out houses, in this town was incredible. And we did. I mean, we even packed our late-night houses. I think that got a little exciting for obvious reasons."

Particularly exciting and meaningful for Mishler, who was born into the Austin theatre community. Her mother, Melba Martinez, was the longtime artistic director of the Mary Moody Northen Theatre at St. Edward's University. "My playpen was in the theatre. I made tents in the greenroom. Brought a sack lunch during the summer to summer stock. Anytime a child was needed in the chorus or anything like that, I was in there. My mom would put me in the shows just so I could be around her and so she could keep an eye on me."

Mishler's is a familiar face in Austin theatre; in the last year, she's appeared in five shows for four different companies, including two with St. Idiot Collective, in which she's a company member. But if you talk with her, she clearly feels something special about The Assumption, which has been remounted this month at the Blue. "The show was created through collaboration, collaboration in its truest form. We took several rehearsal retreats out to a ranch in Blanco that [co-director] Sonnet Blanton's family owns – what we were calling Buck Quest. And it was wonderful. It was like summer camp. Even when we were partying, we were coming up with material. Even Chase Staggs, our scenic designer, played the part of Reynaldo in a couple of pieces, and he even played Hamlet with me in a piece, which is just amazing, because you don't see designers jump in there and create physical vocabulary for the actors. It's this idea of everyone working for the same goal, working for my fellow actor, too, coming up with good ideas that I'm going to give to them to steal."

For the remount, the RAPsters created a new alternate ending, and according to Mishler, they've tried to up the ante on the relationships a bit, make them a little more real in the crazy, caricatured world they've created. Certainly, there's been no need to up the ante on the relationships within the cast. "Throughout the year we got a lot of recognition, and I think that's when we first thought, 'Wow, maybe we should do it again.' And I think also just for the love of the game. We had so much fun, and it was so unique. And then we just wanted to be together again. Maybe we just wanted to drink some whiskey together again." 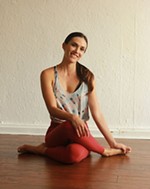 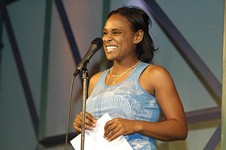