'The Ultimate Christmas Musical: The Musical!' Saving the season with every Christmas story you've ever heard

The Yellow Tape gang works its high-energy, kitschy, crowd-pleasing magic on the holidays 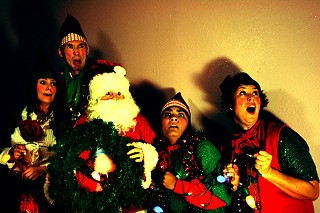 Consulting a trademark attorney before conjuring the name of a production company most likely does not constitute standard artistic practice. However, it wouldn't surprise me if the folks at Yellow Tape Construction Co. did exactly that, for few performance organizations in Austin can claim such a fanciful, arbitrary, suggestive name. Probably best known for the original musical I Love My Dead Gay Son: The Musical!, Yellow Tape has been offering kitschy, popular dance and theatrical productions in the Austin area for the last 2½ years. Now, just in time for your holiday pleasure and as the first offering in the company's third season, the Yellow Tape gang has invented another original crowd-pleaser, The Ultimate Christmas Musical: The Musical!

"I think we found that pretty much everything sounds like it's funnier and more exciting if you just put a colon and 'the Musical' with an exclamation point afterward," says Jonathon Morgan, one of Yellow Tape's co-artistic directors. "One day we'll just do : The Musical! and see if people come to that. That might be fun!"

That kind of comic sensibility fuels Yellow Tape's artistic fire, a sensibility you'll find evident in its latest endeavor. "We wanted to do a Christmas show," says Morgan, "so we watched a bunch of Christmas movies, like some of those old Rankin/Bass movies, the weird Claymation ones, and we came up with our first concept. We crammed as much Christmas stuff in as possible, and it ended up as this murder mystery in Christmastown sort of thing. And we workshopped that, and it kind of sucked, so we went back to the drawing board." What they came up with is a musical with all the usual characters – Rudolph, Santa, Frosty – and some not-so-usual characters – Billy, a character based on A Christmas Story's Ralphie Parker, and a plucky elf named Soniyeve (pronounced so-naive) – attempting to save the spirit of Christmas. "It's mostly an original story," says Morgan, "but it's also a nod to every other Christmas story you've ever heard. And yes, there is an Ultimate Christmas Band: The Band!, piano, guitar, bass, drums, and saxophone. About 60 percent of the show is underscored, and there are 12 original musical numbers, like 'Christmas Time,' 'The Lonely Elf,' 'Rudolph Quits,' 'Don't Lose the Spirit,' 'Frosty's Lament,' 'Drug of Disbelief,' and a couple [of] reprises."

Should you attend, one thing you'll certainly discover is Yellow Tape's almost-inexhaustible store of energy. Says Morgan, "All of us come from a background where we're used to talking on the phone and chatting on IM and sending e-mails – that rabid processing of small pieces of information simultaneously. So we tend to have that flavor in most of our shows. There's a lot going on, but it's exciting and joyful, and when it works, it's a lot of fun." 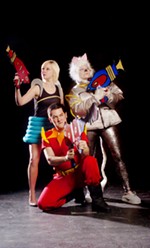