The Neovagina Monologues: Tales of transformation

Tweet
print
write a letter
Sandy Stone has made a career out of spoiling other people's stereotypes. Her new one-person show, The Neovagina Monologues, playing this weekend at the Vortex, shoots straight at the heart of the misconceptions and discomfort surrounding transgendered life.

The title refers to Eve Ensler's massively popular The Vagina Monologues, which was originally a one-person show performed by the author. In form, though, The Neovagina Monologues borrows more from the work of the late storyteller Spalding Gray. In this performance, Stone sits behind a table and tells stories from her life and the lives of other transgendered individuals.

"I have been thinking about this show for decades," says Stone. "But I couldn't do it until now. I had to live through these things and put a fair amount of distance behind me in order to create a show that would be fair to the audience."

Stone's transition to living as a woman is one of the many grand changes and contradictions she has experienced. Stone grew up as the eldest son of a Conservative Jewish family. After working first as a researcher and video artist, Stone turned to the mainstream music scene, finding gigs as a sound engineer for the likes of Jimi Hendrix and the Grateful Dead.

Stone began living as a woman in the 1970s and was soon invited to join the feminist record label Olivia Records, despite the fact that she was at that time preoperative. "[The label] wanted to work with a woman engineer," Stone explains. "At that time, there were none."

When tensions in the feminist community grew too high for Olivia to keep a genetic male on staff, Stone left and taught herself computer programming, before finally turning to academia. Now an associate professor in the Department of Radio-Television-Film at the University of Texas, Stone is an early pioneer in the relatively young field of transgender studies.

Yet the show is decidedly unacademic, says Stone. "The reason I do this is to change lives. Academic papers don't change anything, not in the U.S."

Although she has performed The Neovagina Monologues and other works in Europe, Japan, and around the United States, this weekend's performance marks the first time Stone has performed her work in Austin.

Bonnie Cullum, Vortex Repertory Company's producing artistic director, says she and Stone talked about presenting a show for more than a year, but they had to wait until schedules lined up. "I thought it was really bizarre that Sandy hadn't done another show before [in Austin]. Well, I thought, let's fix that," Cullum says.

"I'm trying to do art for other audiences who are not academics," Stone says. "This show is trying to change the way people think through an act of art. If it doesn't work, then I'll try something else." 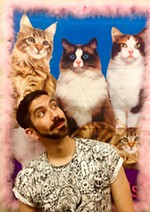