In UT's staging of this postapocalyptic fairy tale, we can't help be sucked into the magic of the infinite hole 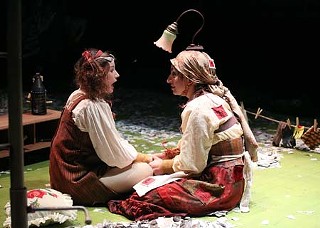 B. Iden Payne Theatre, through Nov. 17

If kids today can handle a villain such as "He-Who-Must-Not-Be-Named" in the adventures of Harry Potter, then why can't the fairy tales of today unsheathe the protective covering over inconvenient truths? After all, today's kids are the ones who will be left to grapple with the greater conflicts of climate change and the stark reality determined by current public-policy-makers. So it's reassuring to see Eve Tulbert, a graduate with an M.F.A. from the University of Texas' Department of Theatre & Dance and Theatre for Youth, write a fairy tale that is so succinct in the context of the issue of pollution and oppression with a plot so wonderfully uncomplicated that we never get lost. UT's premiere production of Tulbert's fable brings it to life in such a way that it's as dark (literally) as it is enchanting with sooty imagination.

Ashes, Ashes is a postapocalyptic fairy tale about a girl growing up in a world covered by an ash cloud. It rains ash. Ash coats the ground and coats peoples' lungs. Nini has never seen the sun, and when her sick mother tucks her in at "night," she wishes her daughter "Good Dark." At the break of light, people come crawling out of the darkness with lights hanging from their heads like pilot fish and turn on the big light in the sky with snaps, crackles, and pop motions like those of cheerleaders. When Nini goes to school, she finds that a classmate has "disintegrated," disappeared, a common problem. After they vanish, their names get trashed in the coal hole, along with some of the history of the world and a few unpopular words. Eventually, Nini jumps down the infinite hole, not looking for a rabbit but for one of those words, and in doing so meets some fantastical characters along the way, including a matronly (though usually frightening) Baba Yaga.

This production is intended for all ages, but you can tell that some of the elaborate acting and pratfalls of a character named Stopwatch (a comical Leslie Chastain) and the villainess character History Book (a stern Chibbi Orduña) have been elevated so that the show is more kid-friendly. Without seeming overly babyish, Emily Tindall bares a childlike soul for the part of Nini. She is part of an all-American family, with warm and loving parental figures played my Kristin Leahey and Rodney Richardson. A chorus of six people create a Kali-like character, morphing over one another with the strength and agility of a company of Martha Graham dancers.

The script required a lot of inspiration from the production crew. Director Dustin Wills had to figure out how to separate water from stone. To realize elements like the hat lights or harnesses, scenic designer Lisa Laratta had to work with costume designer Sarah Mosher, who had to work with lighting designer Paul Hancock, all collaborating in one another's spaces. They were inspired to use recycled newspaper for ash and figured out how to make characters disintegrate. And since the audience is sitting on the B. Iden Payne stage, making it a more intimate arena, we can't help but be sucked into the magic of the infinite hole. 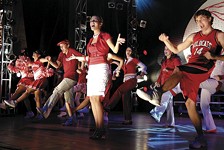