Austin Chamber Music Center: Is that a bow in your pocket, or ... ?

For ACMC's next concert, Hot Enough for Ya, the aim is clear: Let's talk about sex 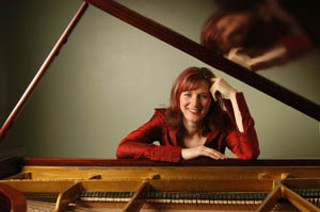 For its most recent series, the Austin Chamber Music Center invited audiences into a raucous concert setting that combined comedy, wit, and glorious music to celebrate humor in music. Under Artistic Director Michelle Schumann, the center has forged ahead with this season's vision to reimagine the multiple personalities of chamber music. For its next concert, titled Hot Enough for Ya, the aim is clear: Let's talk about sex.

The sensual ads and event title certainly don't trigger quick thoughts of classical chamber music. And that's just the point. Says Schumann: "Classical musicians were once the rock stars of their time. There is a perception that composers and musicians were upright and refined, but in reality many of the celebrity scandals of the day surrounded the world of classical music. So for this concert, whether you call it high romanticism or plain tabloid gossip, we're inviting people into an imaginative exploration of torrid, passionate music and the stories of the people behind it."

In the Romantic era, with the societal formalities of symphonic music and opera entrenched, chamber music became essentially the definitive underground party scene. Intellectuals, bohemians, philosophers, and students would assemble in intimate spaces and meld chamber music with debate, politics, wine, and surely other mood-setters to invoke the spirit of Bacchus. Why did this change? "At some point, the tuxedo and its trappings entered the chamber scene," says Schumann, "and with that, the form became elitist and stuffy and seemed out of reach to those without means. Austin is an ideal place to explore a change to this. I'd go as far as to say that Austin could very well lead the way in igniting a new direction for chamber music."

To carry off its theme, the center has engaged Austin's Tosca String Quartet, which has shaped a unique and inventive career of its own that extends beyond the normal boundaries of chamber music. As Schumann reminds us: "Tosca has been there, onstage with David Byrne, amidst thousands of screaming fans – much like the crowds Liszt drew at his prime in the 19th century. With full classical training as foundation, Tosca brings an exciting blend of great integrity and a raw edge to their performances." For Hot Enough for Ya, Schumann and her team have collaborated with the Tosca Quartet to bring the music of Fauré, Piazzolla, Rachmaninoff, and Ravel to their thematic musical journey.

"There is nothing like experiencing something, really getting it, and knowing that the whole room gets it, too. To me, that builds community. As much as musicians need to perform to the highest standards, I truly feel it is also our responsibility to create belonging by connecting with people beyond listening."

The spirit of Schumann's words has led to much recent success for the Austin Chamber Music Center, with regular packed houses and sellout performances this season (including this series' Nov. 9 performance). With captivating conversation as foreplay, Hot is sure to bring great satisfaction. You're encouraged to come with an open mind, a mischievous spirit, and, if you own one, leave your tux at home.