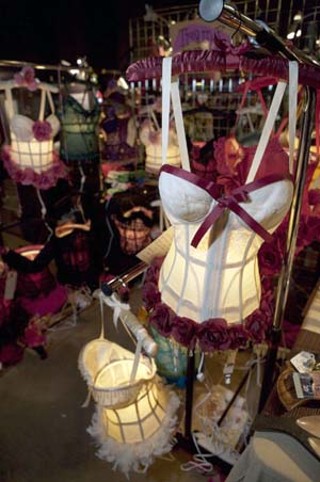 The Stitch Fashion Show and Guerrilla Craft Bazaar is 5 years old this year. This annual celebration of independent design is organized by four Austin designers (Jesse Kelly-Landes of Amet and Sasha, Tina Sparkles of Sparkle Craft, Karly Hand of Identity Crisis Clothing, and Jennifer Perkins of Naughty Secretary Club), who meet all year-round solely to produce this one event. They feature their designs as well as the designs of their crafty and fashion-savvy friends from around the country.

Seeing the amazing business and media network these women have built is inspirational. Stitch is strictly curated for powerful styles, and the designers show a well-rounded variety of products, without duplications of services. The ability to view so many processes of handmade, small-scale manufacturing at once is terrific. Stitch is very much in line with Austin's socially conscious charisma, and the examples of recycling and green-art techniques, like the Rock'n Reusable Grocery Totes by Ballistic Sweater Girl, are total punk rock/Hello Kitty fun. These folks have gone for the gusto, integrating an entertaining fashion catwalk with a craft fair, DIY activities, and live DJ sets. This kind of total saturation and overkill is very Austin. Couture meets rock and knitting needles, and they are all best friends forever.

The casual alliance between rock and crafting was struck in the early days of Austin's crafting scene. Within the overlapping creative communities in Austin, people with DIY skills naturally offered them to their less mechanically inclined musician friends. Thus, hand-printed posters, fliers, and zines; hand-stitched or hand-painted album and CD covers; mouse pads with photos of the band; and even original crafty artworks made by the band, are all par for the course in Austin. So the rise of indie music in Austin coincided with the rise of indie crafters. A stylist from method.hair perfects a powdered wig for the Louise Black collection

Now Austin has craft superstars, big players in the rise of the craft game. Did you know that Sublime Stitching's Jenny Hart was recently featured in Juxtapoz Art & Culture Magazine? In addition to working on Stitch and Austin Craft Mafia projects, Jesse Kelly-Landes, Tina Sparkles, Karly Hand, and Jennifer Perkins currently co-host the DIY Network craft show Stylelicious. Other local luminaries include Chia, who was voted Best Clothing Designer in the Chronicle's "Best of Austin" Readers Poll in 2006 and 2007; Sparkle Craft; Ramonster; Blue Genie Art Industries; Will Heron; and, of course, all nine members of the Austin Craft Mafia (a "craft mafia" being a regional league of makers who join forces as a way of sharing new products, media releases, and upcoming craft convention information). These folks have shared best practices to grow quickly as businesses. For example, Austin Craft Mafia co-founder Jenny Hart has a knowledge of copyright law that is shockingly detailed, and she shares it freely with other crafters through the trademarked national craft mafia network.

That's part of the ethic of the craft scene, which emphasizes a humble spirit of "anyone can craft." Camaraderie is formed with the one-on-one service and one-of-a-kind products – it's like shopping at the farmers' market instead of Wal-Mart. This community sensibility has always guided the event; as the website says, "Since its inception in 2003, Stitch Austin has remained a community-directed, rather than competition-oriented event, serving as an opportunity for participants to connect and build relationships with other members of the community." 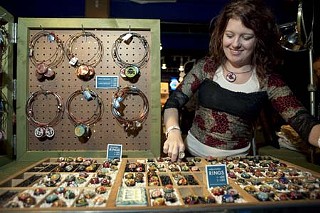 A vendor displays her jewelry at Stitch 2006.

So what is unique about Stitch? Unlike many fairs, Stitch ambitiously includes a runway show, featuring 20 bold designers strutting their finest. Stitch encourages business growth by offering a $1,000 Indie Upstart Grant for which all vendors are eligible. Stitch also has a tradition of encouraging interactive activities at the various booths. There are chances to show off your skills, ask questions, get advice about ordering supplies, ogle the fabulous runway show, and, of course, shop.

Stitch features 100 vendors all selling their handmade items. The sheer variety of objects presented for consumption – the fabrics manipulated with appliqué and quilting techniques, puff-paint fabrics, silk-screen printings, embroidery, beads, hand-dyeing, glitter, and feathers – makes me giddy. It's fun to be reminded of the possibilities of our modern world. Examples of works in vinyl, leather, plastic, crochet, handmade paper, wood, resin, and metals will be displayed in booths full of tiny masterpieces. Perhaps craft is to art museums what the X Games are to the NFL: the spunky up-and-comer, working in urban and suburban theatres. The 2007 show will take place at the Austin Convention Center. Emcee Matt Bearden will present the runway show. Prince Klassen, DJ Ian Orth, Big Face, and DJ Jennifer will perform sets. This year's special guest, Bradley Baumkirchner from season three of Project Runway, is donating an original outfit, which will be modeled and given away as a raffle prize. I'm excited to see the work of visiting designer and co-director of the Art vs. Craft craft fair Faythe Levine. (As the crafting new wave is a very close-knit and supportive community, the notion of one part "vs." or in a battle with another part is superfunny. Crafters have found one another, and they don't need anyone else! The Art vs. Craft website says "they provide a counter-economy" for socially conscious consumers. I must agree.)

The organizers look for unique personal visions and designs that take some risks. These clothing designers make completely wearable day-wear, but there is a precedent for fantasy elements. This year they will keep the experimental bar set high. Hope Perkins has made a line of glittery dresses hand-painted with portraits of dead presidents. Are you kidding me? Chia's designs are known to be surprising and always powerfully fresh. The midcentury modern feel of Pamela Michelle's wood-burned jewelry looks older than it is. The team of L.E. Lake of Optic Waste makes oval-framed silhouettes that harken back to 18th century séances; "Lisette Landry, bird hypnotist" is the title of one framed shadow box. Art Kat Studio shows collaged found-object sculptures next to jewelry made of reappropriated metal pieces. The jewelry is a petite version of the larger aesthetic expressed in the sculptures; there is no friction with their close association.

Also, the amazing Midwesterner Rebecca Yaker is coming down from Minneapolis. Her website, Hazel & Melvin's Room (www.hazelandmelvin.com), shows her sock-monkey lines: custom-colored stuffed animals, single or conjoined; T-shirts and hoodies with faces on them; pants with a cute tail; handbags and totes; and the ultimate "wearable art" series. I want to see the sock-monkey ball gown and suit and bikini. I just do. Of course, even from the website, I can tell that Yaker's "wearable art" sock-monkey series is quality, machine-knitted, and true to the original form. Will the sock-monkey bikini and parasol outfit make its debut at Stitch? Will Jenny Hart and David Zellner be working the runway in sock-monkey outfits? Sock monkeys, hmm ... I always need some ideas for Halloween. Of course, my costume manufacturing process would consist of only sweat suits, scissors, and a glue gun, but thanks, ladies – you've motivated me.