In the space of an hour, this ACC Drama Department production shows the world coming apart 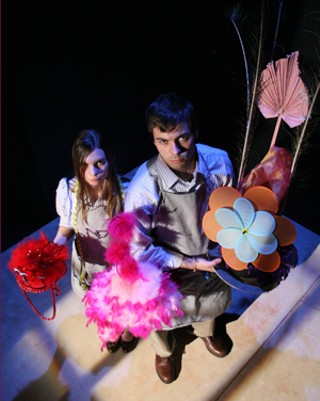 To judge by its opening moments, Caryl Churchill's drama Far Away is a story of domestic distress of the most ordinary kind. A girl in a nightgown, teddy bear clutched to her breast, stands fixed in a square of moonlight like a fly in amber. She tells a woman slumped in a rocking chair across the room that she can't sleep, and the woman, her aunt, wearily tries to reassure the girl that all is well and get her to return to bed. But then the girl starts telling her aunt what she heard and what she saw, and the scene becomes much more than a tale of a child disturbed by a bad dream. Something ominous and brutal and bloody is going on in the shed behind the house where the girl is visiting, and she's glimpsed it. In the Austin Community College Drama Department's production, we come to discover this – and to hear the aunt's increasingly convoluted justifications for the mayhem – in terse exchanges framed by silences and a stillness on the part of actors Melissa Johnson and Jodi Jinks that adds to the dread thickening the air. Under the keen direction of Laura Somers (making a welcome, if brief, return to Austin), Johnson's deadpan little girl and Jinks' aunt (conveying a weariness in her bones down to her soul) sustain a tension that makes this simple scene equally compelling and unnerving.

And to judge by that first scene, Far Away would seem a Pinteresque unfolding of menace in the most mundane of settings. But no sooner does Churchill pack the placated young Joan off to bed – and fill our heads with all manner of questions about what might come next – than the playwright shoots us forward through time to a point when adult Joan is constructing extravagantly fanciful hats for some kind of parade. Gone is all reference to the sinister activity described before and the taut atmosphere of apprehension, and in its place is a series of brief chats in a brightly lighted workspace. If the shift is jarring, at least it takes us to some place innocuous. But something's still not right in Joan's world, and the dialogue between Joan and co-worker Todd – a forthright Steven Alford – eventually reveals their frivolous occupation to be in service to an abhorrent practice: dressing up a state act of mass execution. Here, Churchill punctuates the revelation by depicting the offense, and the image – enhanced by costume designer Jenny Hanna's creations – is at once ridiculous and chilling.

As the play changes to a third scene, you might think yourself prepared for another radical shift in mood and style, but Churchill, a master at keeping audiences off balance, manages yet again to unsettle us, thrusting us forward into a time when all order has unraveled and everything is at war with everything else – not just nations but species of animals, insects, plants, and forces of nature. Joan and Todd are holed up at her aunt's house, where they try to keep track of the shifting alliances – "The cats have come in on the side of the French," says one – but it's as futile as trying to follow the images flashing on the TV the three are huddled around; there are too many, too quickly. You can't keep up.

The characters are rattled by it all, and so are we. That's not just because the play's three scenes are so disconcertingly different or because the threats in them seem so willfully bizarre. We've witnessed, in the space of an hour, the world coming apart. We've moved from a time when violence was contained, having to be kept secret and justified, to a time when it was openly employed by the state, without objection from the citizenry, to a time when it exploded unchecked across the globe. It can happen in one lifetime, Churchill shows us. And perhaps it already has. Look back through your own history, or maybe your aunt's, at the escalation of conflict, the resurgence of capital punishment, the rise of terrorism, the threats we seem unable to control. What looks to be "far away" is sometimes much closer than we think.