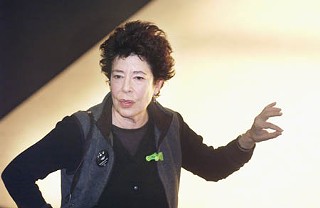 • Choreographer Deborah Hay will receive a BAXten Arts and Artists in Progress Award from the Brooklyn Arts Exchange next week. The awards are bestowed annually upon artists, arts managers, and arts educators who have "revealed and transformed our creative world." The Exchange told Hay, "Your experimental work has remained alive and contemporary over four decades, inspiring your colleagues and peers and now new generations of choreographers and performers. Your sustained commitment and your willingness to change course provides an example for others. Your articulate writing on the body and dance has had a profound impact on the field." Honorees get to choose an individual, organization, or entity for a Passing It on Award, which provides financial assistance to the recipient, so Hay has chosen Movement Research at Judson Church, the spot where her early work took off. The ceremony takes place Thursday, Nov. 1, 8pm, at the Prospect Park Picnic House, Brooklyn. For more information, visit www.bax.org.

• Suzan Zeder and Stacy Wolf, professors at the University of Texas Department of Theatre & Dance, have both been honored by the Association for Theatre in Higher Education. Zeder, playwright and head of the playwriting program at UT's theatre department, is the recipient of the 2007 Outstanding Teacher of Playwriting award from the playwright's division of ATHE. Wolf, who teaches in the Performance as Public Practice program, received an award for Best Essay in Theatre Studies for "'We'll Always Be Bosom Buddies': Female Duets and the Queering of Broadway Musical Theater," which was published in GLQ: A Journal of Lesbian and Gay Studies in 2006. For more information, visit www.athe.org.

• Raul Garza has won the National Latino Playwriting Award from the Arizona Theatre Company for his script Fantasmaville, a humorous look at a Latina and her Anglo husband struggling with gentrification in their old neighborhood. Although Garza has been writing sketches for the Latino Comedy Project for several years, Fantasmaville is his first full-length play. Elaine Romero, ATC's playwright-in-residence, says: "The judges were won over by Raul Garza's fresh comedic voice. ... With a strong dose of irony, Garza captures the plight of urban Chicanos caught between their treasured cultural past and their assimilated present." Garza receives $1,000 along with the award. For more information, visit www.aztheatreco.org.

• Matt Norris is the winner of the first Art Idea competition, sponsored by E.G.A.D!, a collective funding group that seeks donations to finance underfunded ideas. (The group's acronym stands for Everyone's Got a Dream.) Norris' concept for a Human-Powered Road-Going Viking Boat – 12 to 16 rowing machines installed on a simple rolling chassis, over which a pseudomorphic wooden Viking boat will be applied – beat more than 40 other artists' ideas to claim the $2,000 prize. E.G.A.D! founder Benjamin Serrato says it was tough settling on one proposal but that he's "excited that Matt's whimsical proposal for a Human-Powered Road-Going Viking Boat emerged victorious and that the first E.G.A.D! Art Idea prize will enable him to turn his dream into reality." For more information, visit www.egadvc.com.