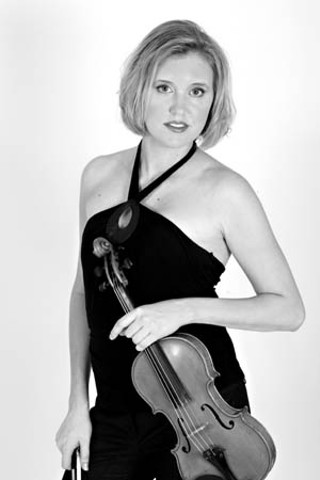 The concertmaster of the Austin Symphony Orchestra was dressed as a witch when I met her for coffee on Congress Avenue. It was the break between two Halloween children's concerts, and all around us were her symphony colleagues, dressed in an array of vibrant costumes. With all this visual distraction, it took some effort at first to focus on the task at hand, namely Jessica Mathaes' upcoming performance of the exciting but seldom-heard Khachaturian Violin Concerto.

As fans of Malcolm Gladwell's Blink know, the face of the American symphony orchestra has changed immensely in recent decades since the addition of a small practice to its hiring process: auditions from behind a screen. With no way to distinguish the gender of players, the makeup of the orchestra has undergone a seismic shift, away from the male-dominated ensemble of the past and toward one with a more balanced representation of the greater musical community.

Mathaes came to ASO three years ago after its extensive 18-month search for a new concertmaster. Following her audition, Mathaes became not only the youngest person to occupy the chair but also the first woman concertmaster in the symphony's 97-year history. As her first solo concerto performance with the orchestra approached, I asked Mathaes to reflect on her experience.

On her position: "As concertmaster, you truly participate in carrying out the conductor's vision for the piece. I enjoy working with Peter Bay immensely, as he is so clear as to how he wants to interpret each work. So through setting the bowings, for instance, which may seem to be simple mechanics, you really get to help influence the interpretation of the piece, as well as serve the intentions of the composer."

On Austin: "Austin is just so alive – this is a place where people really go to events and participate in all that's out there. With the Long Center coming online this year, I think it's truly an exciting time for the city. You can already notice the change taking place at the ASO as we prepare to have our own home, and I think the Long Center will help assure that classical music plays an essential role in preserving the spirit and vitality for which Austin is so famous."

On the Khachaturian: "I've loved this piece since high school, and it has since become my signature piece. This is an exciting, driving, fiery concerto, with the exotic flavors of the East interwoven throughout. The third movement, for instance, plays like a raging party, and you'll hear many Central Asian folk references. This piece is very accessible – I'd say funky and a bit weird, too. Which is why I'm excited to perform this in Austin, as there's a bit of that in the water here, for sure. I'm truly excited to perform before Austin audiences and my fellow colleagues, and for the first time, I don't have to wear black!"

To accompany Mathaes' Khachaturian, Peter Bay has programmed pieces by Stravinsky, Liadov, and Borodin for an all-Russian musical experience at the Riverbend Centre. With the glorious Hill Country views and the costumes of both audience and performer, there will surely be much to see. After the lights go down, though, I'm planning to close my eyes, let my ears be the judge, and just listen.