Arthouse Texas Prize: Five for Texas (the prize, that is)

It's almost time for Arthouse to bestow another $30,000 check on a lucky Lone Star artist, but before the statewide visual-arts organization hands out its second-ever Arthouse Texas Prize at a gala on Nov. 2, it's giving us a chance to see work by this year's five finalists in an exhibition at Arthouse's Jones Center for Contemporary Art, starting this Saturday, Sept. 8. Those five, chosen from 136 artists nominated by art-world professionals, are Dawolu Jabari Anderson, Bill Davenport, and Katrina Moorhead, all of Houston; Justin Boyd of San Antonio; and Margarita Cabrera of El Paso. Anderson comments on the ways that African-American history has been commodified in large-scale paintings on paper that appropriate styles and forms from pop culture, such as comic-book covers, movie posters, and ads. Davenport pokes fun at the attitudes and conventions of the art world through large-scale installations and sculptures built from cheap materials, such as Styrofoam and latex house paint. Moorhead, a transplant from Northern Ireland, explores the contrast between nature and the man-made through installations involving ordinary objects – ceiling fixtures, a billboard, bathroom graffiti – presented in ways that reveal new and beautiful relationships. Boyd reclaims the stories and traditions of historically marginalized American subcultures, such as Native Americans, early African-Americans, and Shakers, through multisensory works that combine sculptural components, objects from teakettles to herbs, audio, video, and performance. Cabrera addresses contemporary issues related to Mexican immigration, dislocation, and notions of the "American Dream" through playful yet provocative sculptures of consumer products disassembled and rebuilt with soft vinyl in place of metal or plastic. Making the call on these five was a jury led by Arthouse Executive Director Sue Graze and including Eileen Maxson, recipient of the first Arthouse Texas Prize in 2005; Frances Colpitt, chair of art history, Texas Christian University; Debra Singer, executive director and chief curator, the Kitchen, New York; and Franklin Sirmans, curator of modern and contemporary art at the Menil Collection in Houston. New Arthouse curator Elizabeth Dunbar put together the exhibition and coordinated the accompanying catalog.

The 2007 Arthouse Texas Prize exhibition will be on view Sept. 7-Nov. 11 at Arthouse's Jones Center, 700 Congress. For more information, call 453-5312 or visit www.arthousetexas.org. 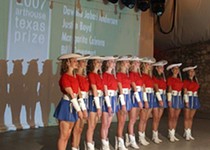 After a Fashion
The slipstream of leather, cashmere, faux fur, and designer logos could be seen from space: Stephen is making the scene, people; cut a swath 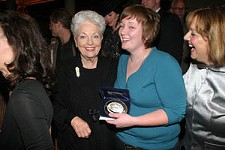