Austin Script Works: A daily dose does a playwright good

Tweet
print
write a letter
Any writer will tell you that there are days when just showing up to work is the biggest challenge. Nobody is there to supervise, and nobody can turn the writer in for playing hooky. Life offers many distractions.

Austin Script Works knows this. This summer, the service organization for playwrights created a program with the aim of helping writers face down the obstacles standing between them and their keyboards. The 30/60/90 Daily Writing Practice attracted nearly 50 participants for its debut run, which ends Sept. 15.

Participating writers paid a fee to join the program for 30, 60, or 90 days. Each morning, Script Works e-mailed them a prompt. The participants then wrote something in response to that prompt: a short scene, a poem, or, at times, just a word or two. Those who wished could post their work and discuss the prompt on an invitation-only blog.

Playwright C. Denby Swanson, who stepped down as ASW's artistic director in June, led the effort to make the 30/60/90 Daily Writing Practice happen. "You can think about writing a lot," she says, "but that's the practice of thinking, not the practice of writing. Daily writing helps get the brain out of the way and makes it about doing the work, not considering the work."

Prompts were gathered from established playwrights, poets, attorneys, and yoga instructors. They varied from the abstract to the specific, from image-based to character-specific.

New York-based playwright Janet Allard contributed several prompts, including one early in the practice: "February." Responses to each prompt varied widely, and for that day, they ranged from a rant about personal finances to a scene with a character named February.

Writers taking part came from all levels: beginner, professional, undergraduate, and with master's degrees. The benefits, however, were the same across the board. Those who had previously let writing slip from the daily to-do list had a reason to make it stick. Quality was less important than the basic satisfaction of doing the work. Some prompts left participants cold, but overall, writers also found themselves challenged to work in directions new to them.

In some cases, the prompts have provided the seed for longer works. Deborah Yarchun, a student at Drexel University in Philadelphia, already has one of her short works from 30/60/90 scheduled for production in the fall.

Vicki Cheatwood is a Dallas-based playwright and the working mother of 10-year-old twin boys. She says that the requirements of everyday life don't make daily writing easy. Participating in 30/60/90 "has helped my tendency toward perfectionist thinking," she says. "In the past, it's been, 'If I don't have four hours of time, I can't write.'"

"Having to write every day has helped so much; it's amazing to me," says Susan Platt, also based in Dallas. "It's made all these other ideas bubble up, sort of like a tar pit." 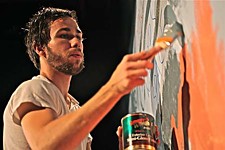