All-Star Micetro: The eternal, ever-changing, cream of all the different improv crops, Micetro convenes a coliseum of competitors who battle via comedy, cunning, and craft. You decide the winner.

Available Cupholders: Ah, the Cupholders! Robust, crisp, with deep notes of dementia and a lingering aftertaste of perversion, this six-person pinnacle of the Austin improv pile is newly fortified with Kaci Beeler and will bust out any format that suits the moment. www.availablecupholders.com

ColdTowne: Need we mention again how these five performers fled New Orleans in the aftermath of Hurricane Katrina and have since brightened the Austin improv scene with their clever, well-meshing antics and their eponymous venue? Okay, then. www.coldtowne.com

Curtis Needs a Ride: This Austin-based foursome, originally from Ft. Worth, are still cohesive and valiant after their first year as a troupe and perform a uniquely blended sort of longform.

Backpack Picnic: Formerly known as Edmond Bulldogs, but now MTV's got their nominative shorthairs in cryogenic suspension. Still, all it takes is a namechange for Mitch Baker and David Bewley, abetted by locals Jeremy Lamb and Shannon McCormick (and filmmaker Rene Pinnell), to wreak surreal havoc on modern life via the smartest sketch comedy ever to warp a human forebrain. www.onnetworks.com/videos/backpack-picnic

The Frank Mills: This sharp quartet of Austin performers specializes in character work, weaving narratives through the interaction of freshly conjured personalities, embodying a more thoughtful (though no less compelling) style of improvisation. www.thefrankmills.com

Get Up: The dynamic Austin duo of Shana Merlin and Shannon McCormick works together, we've said, like two parts of an interlocking dream machine. You'll be amazed at the multi-character gambits these two can pull off, and all of it, somehow, making hilarious narrative sense. getup.austinimprov.com

Gigglepants: Because you have to do something besides study if you're in college, this gaggle of young UT toilers manifests a sustained psychosomatic twitch they call improv. www.myspace.com/gigglepantsimprov

Girls Girls Girls: They're dreamy, they've got all the candy, and they sing. This grrl gang of Austinites performs complete musicals from audience suggestions, accompanied by live keyboards, fueled by relentless invention and longtime camaraderie. ggg.austinimprov.com

Hoover's Blanket: This Austinian sextet of sketch comedians blows modern life to smithereens and makes the little pieces dance a mid-air tango as they fall back to earth. If you haven't seen Blanketeer C. J. Allen "Takin' It To The Streets" on YouTube, you haven't been happy enough today: www.youtube.com/watch?v=6kdSvLL2qMQ

Improv for Evil: These six Austin improvisers may be evil, we wouldn't suggest otherwise; but they're also good and not really as scary as their website makes them seem. Right, guys? Right? Hey, owwwww. www.improvforevil.com

Junk: We like this Austin improv quartet, especially as it takes Hideout manager Andy Crouch out from behind the scenes and lets him play with three of the funniest Micetro regulars. www.junkimprov.com

The Knuckleball Now: These three are Austinites, except for D'Alonzo, who moved to L.A. but returns to bring the hot liquid improvisation of Craig Kotfas and David Modigliani to a boiling point. Wild, wacky, and often damned philosophical, this trio. www.theknuckleballnow.net

Latino Comedy Project: Adrian Villegas, el jefe of Austin's LCP, opens up a can of comedy-monologue whup-ass, interspersed with new videos and spiked with enough bi-cultural skewering to italicize the panic in Hispanic. www.lcp.org

The Leading Brands: Five Austinities who embody the spirits of major commercial corners in the US of A? Perhaps. Definitely IN UR THEATRE, IMPROVISING UR STORIES. www.theleadingbrands.com

Look Cookie: They're young, they're fresh, they're the future of Austin improv. And hey, they're part of why the present's so damned funny, too. www.myspace.com/lookcookiecrew

Parallelogramophonograph: Austin's cutest improvisers, they've been called, and with good reason: Other superlatives fail when describing the playful exuberance this quartet displays in embodying an audience's wildest suggestions. www.pgraph.com

Vinyl Destination: These Austinites capitalize on the local music scene by setting their improv'd musical and comedy shows in a record store where "the employees can't agree on anything about music except that it sounds better on black wax."

You Me & Greg: Aw, this Austin trio doesn't even do improv anymore, now that they've gone all rockstarry with their band SuperHouse. But the OoB draws them back to the improvising stage for one! Last! Show! www.myspace.com/superhouserock

You're Fat: Rachel Madorsky of The Frank Mills and Onion contributor Jill Morris bring the festival a sketch show about sex, drugs, friendship, and how great life would be if we could all keep lying to ourselves. Yes, they're funny – we wouldn't lie to you.

Cathcart & Olson: Chicago's Melissa Cathcart and Jay Olson, veterans of comedy festivals all across North America, have been purveying their rapid-fire brand of hijinks together for almost 10 years. www.c-ocomedy.com

f*squared: Alison Coriell and Michael Garcia, a longform duo from Houston, take a single audience suggestion and create interconnected scenes and storylines that rely on grounded characters and situations, then use another suggestion to improvise a short film (available online the next day) outside the theatre. www.myspace.com/f2improv

Freudian Slip: Another college troupe? Yes, direct from Texas A & M and defending a thesis of comedy every night of their lives.

Impro Theatre (L.A. Theatresports): One of the two big headliners this year, these folks (including former Austinite Edi Patterson) will be engaging in the highest caliber of improvisation as they bring an entire impromptu Shakespeare to the stage. www.myspace.com/improtheatre

Inflatable Betty: Five women from L.A., been all up in your TV set and on your favorite shows, here to wing it like brilliant birds onstage. "No script, no rules, no boys."

Knife Fight!: Straight outta Hollywood is where this septet of improvisers emanates from, bringing their knowledge of the mean and star-studded streets to the set-designed boards and beyond. www.myspace.com/knifefightcomedy

Obviously Unrehearsed: Improv Oklahoma University's reps in the collegiate improv tournament, here to kick ass and eat better Mexican food than they can get at home.

Pavlov's Dogs: An actual octet, by Crom! A big ol' troupe who've been showing Dallas and Ft. Worth what the comedy improv is all about, now expanding their territory to the Texas capital. www.pdogs.com

pHrenzy: But, wait, here's another eight-top. This one's from the Windy City, Hog Butcher to the World, but it's only each other they'll be slaughtering in a sort of Chicago-flavored Micetro format. Perhaps this is the ultimate showdown of ultimate destiny? www.whatisph.com

Razowsky and Clifford: Ah, the other big headliner. David Razowsky is the artistic director of Second City, L.A.; Carrie Clifford, possibly the only person who can match his masterful improv prowess; what warped narratives the two of them spin depends on where an audience member places two chairs onstage. www.myspace.com/razowskyandclifford

Renob Control: Yes, that's "boner" backwards. No, we can't tell you why. Of course, these Portland-based festival stalwarts, the hardest working sketch troupe in the Northwest, will delight you by incorporating music and maybe even puppets into their bizarre antics. www.renobcontrol.com

Revolving Madness: They're not leaving their laughs in San Francisco, ho ho, as this tetrumvirate from the city by the bay invades the OoB with their warped brand of improvisation. www.revolvingmadness.net

Scatter!: The improv contingent from the University of Houston drives north to the best city in Texas to match skills with others of their ilk.

Shiner: Four fierce graduates of the Second City Conservatory in Los Angeles, banded together to show the world what they can do with the tricks and tropes of improv honed in their Santa Monica hometown. www.myspace.com/shinercomedy

Silver City Pink: Another all-women troupe from L.A.? Yes, and there's eight of them; but this troupe improvises a longform narrative inspired by a male monologist, and at the OoB that male is the Knuckleball Now's Mike D'Alonzo. www.myspace.com/silvercitypink8

Spontaneous Combustion: Rice University wouldn't dare skip the OoB's College Night, and that's why these guys are in town. Should the other troupes fear them?

Start Trekkin NYC: Ben Sterling left Austin, but he couldn't leave the UFP captaincy behind. Now he's back with a gang of New York compatriots, boldly going where too few improvisers have been geeky enough to go before. www.myspace.com/starttrekkinny

The Trip Fives: This quincunx of improvisers brings the finest Kansas City style to bear on the craft and the madness, showing off skills honed at Second City Chicago and Improv Olympic. www.myspace.com/thetripfives

The Victims: From the Pocket Sandwich Theatre in Dallas comes this troupe of four, four in legion, set to turn improv on its ass. Their motto? "Your mom uses scripts." www.myspace.com/victimsoffun

All Over Creation: A Brief History of Laugh Riots in Austin
As April overflows with comedy festivals, an overview of Austin's celebrations of funny 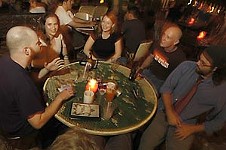