'Radical Nautical,' maybe the most jam-packed show in Gallery Lombardi history, is a quirky, energetic celebration of water 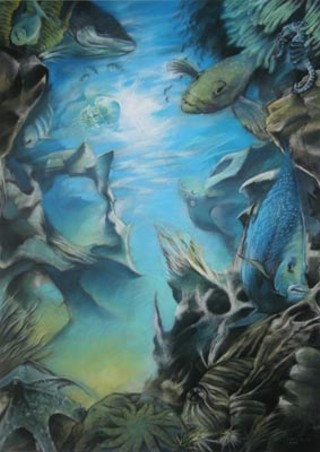 With their movie trilogy, Edward Scissorhands, Legolas, and Guinevere got the world to once again dream about pirates and the open sea. With rainbows in their eyes, Ian Schultz with Michael Schliefke got Austin to once again frolic with unicorns. It seems only magical that Gallery Lombardi curator (and Chronicle Arts writer) Rachel Koper would join Kevin Peake, Kevin Tijerina, Schliefke, and Schultz in bringing together the water-themed "Radical Nautical."

At the opening reception, the venue itself participated and became a sea of bodies. After witnessing a mermaid playing music to a group of swabs, I joined the inching flow of people through the gallery and out into the parking lot. With standing room only (in the parking lot!), costumed wanderers, both people's and jurors' choice awards, and the good vibes all around, this event was truly radical, dude. Oh yeah, there was art, too. Even though the gallery is familiar to the salon-style displaying of art, this show certainly made an effort to be the most jam-packed show in Lombardi history. There were plenty of mermaids and pirates, ships and maps, octopi and sea monsters, and, of course, water everywhere.

Entering the gallery, the hallway is filled with work. But it is Aaron Sacco's Red Sea (pictured) that draws you in and around the bend. Water glistens and refracts as fish swim on either side of a chasm. The ornate frame adds to the well-rendered and composed image of sea life. In the main room, Marianne Levy's sculptural work hangs surprisingly high above eye level yet seems very comfortable there. The harsh surface of the corallike objects reveal a pleasant contradiction to the water theme. John Cobb's works on paper present this contradiction in the physical application of material. The chessboard Sea Life Chess by Laura Sturtz is also visually coarse yet buoyant.

Besides Cobb, two other artists grabbed my attention with their focus on water. Where Cobb's water looks like pumice, Eric Uhlir's A Tragic Affair depicts a slicker water, and thus it feels more ... wet. With the actual use of water, Jamie Wentz's Waterfall takes the most literal route and stands out as an anomaly. It may be my affinity for transparent containers filled with water illuminated with clamp lamps, but even in the well-lit gallery, the glistening and refraction of light is entertaining.

"Radical Nautical" probably wasn't as quirky as "Will There Ever Be a Rainbow?" because the theme was more open-ended, but the energy more than made up for it. Like "Draw" earlier this year at Lombardi, this show is a celebration. Artists came together and shared their viewpoints on a given topic. I'd venture to say that some community was identified. It's back-to-school time, so these summer contacts better keep in touch.