Despite its fairy-tale trappings, ethos' opera The Dragonfly Princess takes us down a dark path of intrigues, heresy, power struggles, and death 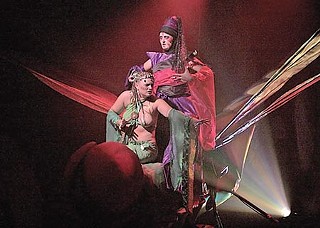 The Vortex, through Sept. 8

As birthday presents go, this one's a doozy: an order to kill your cousin. As soon as Qlye, the queen of the treetop-dwelling fairies in the forest of Ovona, drops this command on her daughter Mala, the titular princess in Chad Salvata's new opera, it's clear that this fairy tale will be not be as light and delicate as a dragonfly's wings. Indeed, despite the bright and fanciful costumes, sprite movement, and gigantic insect that dominates the Vortex stage in ethos' premiere production of The Dragonfly Princess, this is a drama that takes us down a very dark path – or up a dark river, to be more accurate – where its royal heroine must confront intrigues, heresy, power struggles, and death.

Mala's mission takes her to the Outlands, where her cousin, a high priestess, had been working with the Wild Fae that supply Ovo City with glowing white pearls to illuminate the treetop community. But like Kurtz in Conrad's Heart of Darkness – from which The Dragonfly Princess draws considerable inspiration – Vyn has "gone native," abandoning her temple and disrupting the flow of pearls to Ovo City. With her home on the verge of a calamitous blackout, Mala must restore the pearl supply and terminate Vyn – with extreme prejudice, no doubt. Her journey, made on Xéphera the dragonfly (a noble mount as realized by set designer Ann Marie Gordon and technical directors Elaine Jacobs and Shekhar Govind), takes Mala to coral lagoons, volcanic islands, and caverns deep underground, bringing her face-to-face with lethal mosquito swarms, salt-water magic, tidal waves, crab fae, enchanted centipedes, and colored pearls of great power.

As in previous works such as The X & Y Trilogy, Elytra, and Pythia Dust, Salvata presents a lavishly imagined world with a mythology as convoluted as it is inventive. For the most part here, however, he lays it out clearly enough that we can follow it almost completely without consulting the synopsis in the program. What occasionally trips him (and us) up are a few arias heavy with exposition, in which it's easy to get lost in the thicket of bizarre details. But even when we may be unsure of, say, the difference between a Koil and a Krinn or what it is in the creation myth sung by the priestess Quain that so upsets Mala, the performers clearly are not. They know who they are and where they are and what they're doing, and they sing of it with impressive conviction, no matter how fantastic the matter or how much flesh they're exposing (and most of the performers bare at least one breast throughout). Kristine Olson's Qlye and Betsy McCann's Vyn both project a stern menace – you'd think twice before crossing either – while Emerald Mystiek's Quain and Kira Parra's aquatic oracle Eshi both radiate a kind of serenity suited to their religious state. As Mala, Melissa Vogt-Patterson must begin as something of a joyful innocent and pass through trials, temptation, and a duel with her opposite to a place of new knowledge, about the world and about herself, and the actress does a lot to bring us along with her; she gives us a very open character, never more so than in her shock over Quain's literal rewriting of history and in a pair of lovely duets, one with Olson and one with Michelle Fowler-Amato, playing Mala's trusty guide, Joji. Her Mala is someone we can trust.

The same may be said for director Bonnie Cullum, who's been leading us through ethos' amazing worlds for a decade now, always with a steady, reassuring hand. She does so again here, with aid from many longtime collaborators – Salvata, Gordon, lighting designer Jason Amato, Jo Beth Henderson, who arranged the vocals with Salvata – all doing their part to transport us to this other realm and doing so with skill and style. There are moments that strain for effect, when emotion is played so broadly as to court the sort of hokeyness of an old Saturday-matinee serial. But then this isn't the kind of work you go to for low-key naturalism. The operas of ethos traffic in myth, which calls for a kind of expansiveness. This one is a mythic journey at the end of which its protagonist discovers truths about herself. And that, when it comes down to it, is a doozy of a birthday present.