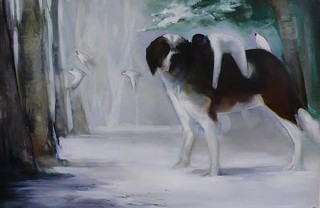 St. Bernard With Ptarmigans and Sleeping Boy, an oil painting by Cecelia Phillips

The first part to Creative Research Lab's three-part summer master of fine arts exhibition, "Interchange," which ran the first two weeks of July, was frozen quiet. "The Burden of History" and "The Eternal Moment" both started things slowly and left time for contemplation. A quick look around the gallery showed that the installation was very spacious. "The Eternal Moment" could be identified by the use of light. A cool light gently cradled "the" moment in both Anna Krachey's portraits and Laura Turner's interiors. Joseph Winchester's snowy, scratchy video described the moment in a similar light. One of Alec Appl's contraptions sat atop a moss-covered mound. A spotlight activated a minuscule motor shifting a gyroscope antenna through a small solar panel. The same humming energy could be sensed in the paintings of Virginia Yount. In the shadowy foreground, an ominous congregation of rectangular machines littered the ground.

Meanwhile, "The Burden of History" was marked by confrontation. Joshua Welker's ghostly white object, suggesting a tree or a hastily constructed streetlight, stood in front of a similarly fabricated painting. Depending on your focus, the painting shifted between describing a street with buildings flanking the road or a tower with diagramming lines. Machines came crashing together in the works of Peter Johansen: The Enola Gay was intertwined with the Mayflower, and the Red Baron faced off against Mount Rushmore. History also collided in Kurt Mueller's A History of Ultimatums. Simple black texts on white posters republished threats of war and threats from popular culture such as movies, songs, and fairy tales.

The second part of "Interchange," which ran July 21-Aug. 4, provided more active visuals. "Ignis Fatuus" showed fantasy moving toward the familiar, while "Problematizing Representation" began with an understood depiction and broke it down to a more abstracted level. Although the end products ideally met in the center, it was easy to identify "Ignus Fatuus" as the works with a clearly delineated form and "Problematizing Representation" as the ones with obscured identities. Christa Mares and Cecelia Phillips spread their reach to both themes by retaining identifiable elements and employing fantastical effects. Mares ensnared plastic or ceramic figurines in a large crochet web. The edges of forms in Phillips' paintings were blurry and misty but did not obscure the portraits. The light was magical.

On the ground sat the Death Star. With careful observation, you could see Peter Johansen had positioned Sputnik in the dark corner above, pointed directly at the firing mechanism of the famed Star Wars battle station. Jill Pangallo interacted, sometimes creepily, with her twin doll and described an inseparable world of toys and life. Jani Benjamins' prints had a familiar look, but unless you compared your own hand to the marks, you might not have recognized the tool. Tape and stencils aided Bonnie Gammill in creating her candy-colored urbanscapes. Karri Paul's paintings flanked the exit: To the right, odd-shaped aluminum panels contained a muddied look at communication through phone and TV; to the left, a vertical painting almost suggested a mirrored grassy landscape.

The final part of "Interchange" presents perhaps the most activity with the fewest artists. "Add and Subtract" and "Discordance" serve as self-describing themes. Benjamins' erasing and Wite-Out on magazine pages, Paul's arranging of painting surfaces, Gammill's layering of paint, and Amelia Winger-Bearskin's video compilation are all forms of collage. Different levels of confrontation are employed for "Discordance." Mueller's barrage of ultimatums and Pangallo's ineffective corporate-training video point out disagreements. Perhaps the most engaging discordance comes from Winger-Bearskin's video Backup (Cupid, That'll Be the Day, Jolene). A triptych of the artist, each portrait sings the backup verses of a different song. The dissonance amplifies the absence of musical harmony. But the iconic white earbuds act as cultural blinders and implicate selfish consumers in the global disharmony.

Jerry Saltz, senior art critic at New York Magazine, recently wrote about curating, "Two artworks arranged alchemically leave each intact, transform both and create a third thing." The generous breathing room, complex thematic structure, and use of an awesomely designed catalog as focal point and guide in this year's summer show mark a positive departure from last year's tired itinerary. There is still a sense of a big show-and-tell, but you can also sense that curators Lynn Boland, Kathryn Hixson, Katja Rivera, Deborah Spivak, Edwin Stirman, and Amanda Douberley (also a Chronicle Arts writer) were allowed to do their job. With a trilogy of shows, the relationships between artists and artworks are concise and persuasive. Curators curate. Like movie producers or editors, they must know how to arrange elements to deliver the best product. Sometimes that includes omitting elements. The job may be thankless at times, but when it's done right, the artwork shines ever brighter.