Rainbow Family of the Serendipitous Now refracts the Orpheus myth through the lens of the Manson family in a seamless, complex, color-coded vehicle 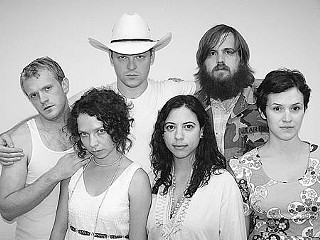 Okay, a lot of people have certain things that are their kinds of things and certain things that are not their kinds of things. And this kind of show is, wow, so not my kind of thing. Which is a testament to how good it is, since I enjoyed it so much anyway, and which allowed me to better examine its complex machinery, as I wasn't bewitched by infatuation with the kind of thing it is.

What it is, is a Mystical Journey From Light to Darkness, and if that sounds like an ancient form, be aware that the St. Idiot Collective has intentionally lifted the framework of Greek myth – Orpheus and Eurydice, in particular – to engage the specifics of a more modern tale of moral descent. The modern tale is a ripped-from-yesterday's-headlines drama of family values, and the family whose values are in consideration is named, out here in the real world, Manson. You remember those cuddly knuckleheads, right?

Yes, well, here we have the story retold as a sort of vision quest gone wrong, with the always appealing Robert Pierson as Father, leading his Rainbow Family of ever-so-colorful children (and their newest recruit, a truck-fresh bumpkin solidly played by Brent Werzner) down an acid-fueled path other than primrose until they reach the end of their journey at what we could cleverly refer to as a splatterpunk exhibition at the Tate Gallery.

There were splatters, and plenty of them – in real life, anyway. Contrarily, in this production, they –

But that's what I want to talk about: the theatricality of this show.

There's a lot of it.

You'd think, if you were me, that would be a bad thing. Because your reviewer is more appreciative of the realist school of drama, where the audience is like a fly on the wall of whatever location the strictly natural (albeit scripted, sure) and unadorned progression of events takes place. Because the idea of character types, as opposed to actual characters, going through the motions of some allegorical construct that's all dolled up with lighting and movement and juxtaposition, leaves me a bit cold. That may be, though, because it's usually not done as well as it is here.

It's a bit unnerving to think that an actor as talented as Jeffery Mills can also bring such heavy firepower to his job as director, which seems to be the case. Every aspect of this production works to support and amplify every other aspect: the blocking, the lighting, the sound design, all of it creating a seamless, complex (and color-coded!) vehicle to drive the story to its conclusion.

It helps, of course, that all the performers here are so good. You can catch some shows in this town (as in any town) where the actors are merely hobbyists who enjoy being under spotlights, and you can suffer through a show while those good-intentioned people act like they're acting – "Gosh-wow, look at me: I'm on a stage, playing make-believe!" – and you can leave with a bad taste in your mind's mouth and a feeling of general dyspepsia that will last for days. Or you can watch the St. Idiots perform and experience the work of professionals who, whether they're being dramatic or comedic, aren't just fooling around.

Let's mention, too, the script by Adrienne Dawes, which is as serviceable as it needs to be, except for the soliloquies provided for the Sharon Tate character who stands (and revolves) alone on a gorgeous Craig Staggs pedestal on the left side of an otherwise bare stage. Then the writing is deep and strange, like something Ruth Margraff would've penned if she'd actually been born on this planet, and it's wonderfully spoken and sung by Kristin Malko, who wouldn't be a poor replacement the next time Mia Doi Todd has to cancel a concert.

All this and an astonishingly elegant depiction of a pregnant woman slaughtered by mindfucked cretins.

What's not to love?