In 'New American Talent: The 22nd Exhibition,' we may be witnessing a return to structure 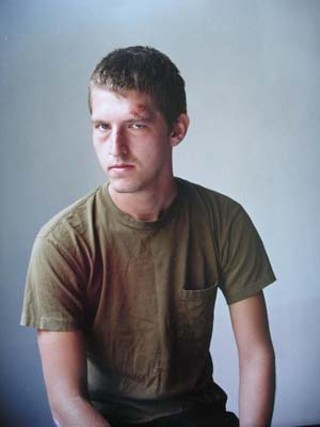 Arthouse at the Jones Center, through Aug. 19

Where last year a colorful tape installation by Rebecca Ward invited passersby into Arthouse, this year hangs a colorful painting with familiar colorful lines. Walking through "New American Talent: The Twenty-Second Exhibition," you notice a significant difference, as there are three general sections. Behind the reception desk, you see colorful works dealing mostly with landscape; in the front area, you can generally find drawings; and in the third room, photographs create the bulk of the work. So like the previous installments of "NAT," there is a variety of media presented, as there is no one school of thought influencing young artists today.

Even with the three separate sections, elements have a strong presence that refers to identifying a location. Color and paint are used heavily in describing landscapes. The drawings use line to delineate an identity. The photographs isolate locations and render an identity. Not completely segregated, some works shout out their allegiance to other work across the three sections.

An Austin-centric grouping of landscape concerns, Rebecca Rothfus' construction cranes on the horizon match Joseph Phillips' slabs of property in both color and relation to development. Jenene Nagy's and Candace Briceño's pods flank Phillips' plots of land. Together with Elizabeth Saveri, this group provides piecemeal landscape in the form of islands.

One of the few extra-dimensional works acts like those most simplified. Wonjung Choi's installation of phantom fish-creatures constellate in the back hallway, interconnected with lines of beads. A similar composition can be found in the dotting icons and marks of Elwyn Palmerton's ink drawings. The linear elements also recruit John Hovig's and Felice Grodin's systematic diagrams. Coincidentally, all of these artists' drawings are ink on mylar.

As entertaining as Damian Gilley's video is, the visual action of the dancer contrasts with the stoic character of the background. William Hundley achieves a similar effect with his floating fabrics. The foreground elements outshine the rest of the image, but by doing so, they describe what would otherwise go unnoticed. The dual videos of Yanira Cartagena demonstrate a body displaced from what can be construed as hiding places. Again, defining what would otherwise be overlooked.

Although juror Anne Ellegood may defer to the requisite language about the artist free-for-all used in large juried shows like "NAT" exhibits, the work suggests something otherwise. The mapping strategy of a lot of the work creates identity, as in the figurative work not mentioned here, but it also begins to define structure. If you're lost, more than likely you will try to orient yourself. Looking for markers, describing your surroundings, inspecting details, all in an attempt to figure out which way to go.

If artists have been wandering without direction, forcing jurors to choose work based on their personal interest as evidenced in recent "NAT" shows, then perhaps this year reveals artists inching toward some cohesion. The exploration of urban development and redevelopment, as in the landscape works, acts as an admission that we are reaching capacity, even when there is still distance between neighbors. Drawing maps, using lines to describe paths and boundaries, recording where we have been, also defines where we have failed to venture. Rediscovering or, if you must, recontextualizing those places that we experience every day can help remind us that we are where we need to be. It's not a return to basics, but perhaps we are witnessing a return to structure.