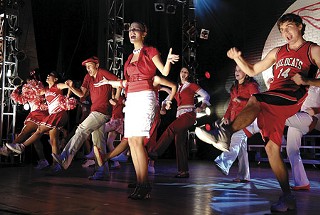 R.L. Davis Auditorium at Texas School for the Deaf, through Aug. 12

During the Zachary Scott Theatre Center's production of Disney's High School Musical, I watched a 3-year-old escape from her mother's arms into the aisle of the R.L. Davis Auditorium and start kickin' and shakin' it to the finale, "We're All in This Together." Bedecked in paraphernalia advertising the made-for-TV musical, the teenagers and ankle-biters who made up the bulk of the audience sat next to their parents ready to sing along.

Rather than "rama lama lama ka dinga da dinga dong," this show's song about togetherness has, well, actual words. But High School Musical is pretty much Grease with Disney having excised all the things that were rebellious in the earlier show -- like gangs and sex -- and repackaged the musical with sparkling-clean afterschool-special morals and Bop Magazine cover models. Zach's production, however, explodes on the stage with cheerleaders and basketballs whizzing about as if the show were put in a blender with glitter, proving that the live version can beat out what's in the box.

The story begins with Troy Bolton and Gabriella Montez meeting at a karaoke competition over winter break and harmonizing on a soft pop song about new beginnings. Hearing the graceful voices of Eric Ferguson as Troy and Sarah Becker as Gabriella is refreshing compared to the high-pitched and synthesized voices of celebutantes like, say, Hilary Duff.

When Gabriella transfers to Troy's school, she discovers he's really a basketball jock, and he learns she's really a math whiz. In an effort to shed their reputations, the two decide to audition for the winter musical, much to the dismay of their very own stock best friends and a hot-pink villainess named Sharpay. Well, no one ever said Disney characters were particularly original. (Or underprivileged, as can be seen in a new song based on cell-phone use that was not in the movie.)

Troy's father, who happens to be the basketball coach, has been browbeating him to win the next championship. The catchy number "Get'cha Head in the Game" hams up the idea with high school Globetrotters bouncing their basketballs to the beat and passing them between their legs or to one another in ways that aren't being faked with special camera angles or cuts. These actors are quadruple threats: equally skilled at acting, singing, dancing, and dribbling. Sound designer Craig Brock's screeching sneakers and gymnasium echoes here are reminiscent of Björk's "In the Musicals." Choreographers Lisa Holmstrom and Robin Lewis intertwine cheerleading with dance in many of the songs, not just the obvious cheerleading segments.

Battle lines are drawn between theatre and sports, with the coach and drama teacher arguing over whether their students can spare time for such "nonsense." Peer pressure from Gabriella's and Troy's respective social circles to maintain the status quo gets aggressive, but the couple's desire to sing and dance turns out to be much greater.

Ultimately, this Disney drama is about acceptance of individuality with the added notion that "in the theatre, anything is possible ... you can be anything you want to be." This is especially true for director Dave Steakley's "student body" here, which is brimming with eager virtuosos. Some of the young actors are still taking their first steps into high school while others are attending college in the fall. You would never be able to tell that this is the first production for a handful of them, which attests to the level of talent possessed by these young adults -- more than many of their prefab Disney counterparts. And more than enough to get you dancing in the aisles.