If you go see the Vestige Group production of Cindy Lou Johnson's Brilliant Traces, go for the performances 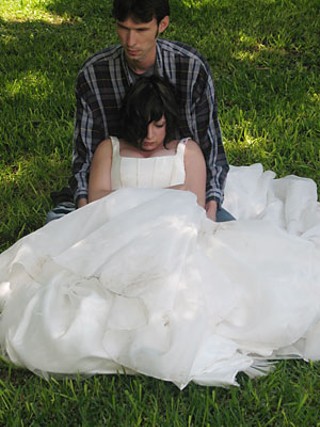 Everyone knows what a broken heart feels like. Rosannah DeLuce certainly knows. She stood at the top of the aisle at her own wedding in Arizona, gazed at the hair on the head of her groom, took five steps back, and fell headlong into the parking lot. Then she drove, stopping only for gas and candy bars, until her car broke down in the furthermost reaches of the Alaskan wilderness. She wandered through a whiteout snowstorm until she reached a cabin belonging to Henry Harry, a man hiding from the world because his heart has been broken, too. When Rosannah falls in Henry's door, he lies on his cot watching her toss back three or four shots of liquor and pass out in the middle of his floor. After considering the situation, he gently picks her up, places her on the cot, removes her wedding dress, bathes her, and covers her up. She sleeps for two days, speaking only once, when she suddenly sits up and says, "I'm the most beautiful girl you've ever seen."

If you should attend the Vestige Group production of Cindy Lou Johnson's Brilliant Traces, go for the performances. Jen Brown initially plays Rosannah as loud, panicked, and delirious, and that makes sense, considering she's walked miles in thin slippers through a raging storm. On waking, Brown embodies Rosannah's fear and confusion effectively, and as she bounces back and forth between opening up to Henry and running away from him, she manages to make the varied and conflicting qualities of strength, pain, and vulnerability blend into a very credible performance. As Henry, Andrew Varenhorst presents an even more compelling presence. With his unkempt beard and tall, lanky frame, it's not much of a stretch to believe that Varenhorst is a hermit living in a cabin in the wilderness, but his performance goes far beyond surface appearances. He conveys Henry's overly sensitive nature, speaking too loudly, suddenly angering, and then shutting down in avoidance, and most particularly, he uses stillness to great effect, often doing little more than standing still and delivering his lines with just a bit too much volume and intensity. You feel for the guy. You really do. And although director Susie Gidseg allows her actors to cut a lot of beautiful moments too short and allows Varenhorst to shove his hands in his pockets a few too many times, she deserves credit for assisting both actors in creating such fully fleshed-out characters. She also deserves credit for staging the show so simply, on a minimal set with only the barest necessities, while still doing just enough to support Johnson's spare story.

And what a beautiful story it is. You may not quite believe that someone would do what Rosannah does, but who among us at one time or another hasn't wanted to run? And while running might seem like the wrong thing to do in almost any circumstance, for some it may be the rightest thing they've ever done. Yes, your heart can be broken. But if you're lucky, it can be healed as well, perhaps completely by chance, without ever really looking for it at all.