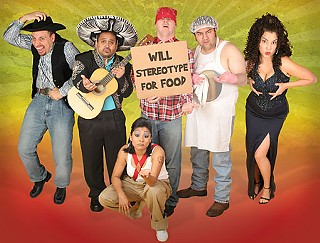 Comedy troupes come and go, but fortunately for Austin, the Latino Comedy Project is always around, though it may not necessarily seem that way. The LCP first made a splash locally almost 10 years ago, and since then it's become known for its numerous full-length sketch-comedy shows, as well as the annual Latino Comedy Fiesta, which assembled stand-up acts and sketch troupes from around the country. With the flooding of the State Theatre, the members of the LCP found themselves without their preferred venue, so they turned their efforts to touring, playing smaller local houses, and producing videos. But breathe a collective sigh of relief, Austin: The current political climate is ripe for comedy, and the LCP is back with AlienNation, its first all-new show in two years.

"It's so funny," says Adrian Villegas, LCP's artistic director, "there's such a Kabuki dance going on in this country right now with the immigration 'debate,' because when it comes down to it, nothing's going to substantially change. We want to act like Mexican immigrants are separate from the country, but they're part of the fabric of the nation whether people want to admit or even like it. And the predictable byproduct of the 'debate' is xenophobia and resentment. That kind of scapegoating only happens in times of economic stress. The last big wave of it was in the early Nineties, when there was a major recession. Right now it's a combination of that plus we have politicians who are deliberately trying to fan the issue to give their constituency something to be distracted by."

Not that Villegas would want anyone to think the show is entirely political, but hey, if it doesn't have bite, it isn't satire. "We have a lot of fun with the whole idea on many levels, like the almost superhuman tenacity of undocumented Mexican immigrants -- the whole 'illegal alien' thing is just a dehumanizing warping of language going on right now, in my opinion. Because whatever roadblock is put up, historically Mexican immigrants always find a way around it. There's one sketch called 'El Wall,' in which the U.S. government has finally built that gigantic wall they keep threatening to build, with the joke being that the Mexicans on the other side just turn it into a financially prosperous tourist attraction/amusement park. We also have a video series that plays on the Mac PC ads. A 'Mex' from the other side and a 'BC' (Born Citizen) kind of compare their approaches to life. Like with travel: The Mexican talks about almost losing an arm and being attacked by wild animals crossing the border, while the BC complains about the airline losing his luggage."

Making the show twice as special is the fact that AlienNation will be the first production in Austin's new Mexican American Cultural Center. "It's actually preceding the official grand opening," says Villegas. "Amparo Garcia-Crow [the MACC's program director] is really doing a great job. It's going to be a major hub of activity in a very short period of time. People are flocking to it already. Amparo wants to use the community as a resource and fill the place with events constantly, just have something going on there all the time. It's a beautiful building. You should check it out." 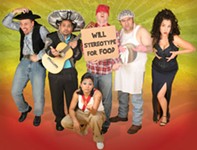