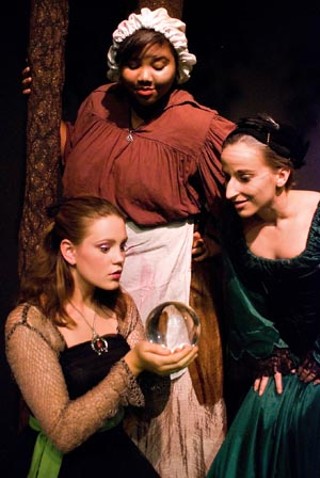 The Vortex, through July 28

It is summertime, and things are particularly fantastical this year: Harry Potter 5 and 7; Shrek 3; Spider-Man 3; Pirates 3; Transformers 1. It seems that viewers and readers are craving escape more than ever. It is fitting then that Vortex Repertory Company has selected Terry Pratchett's Wyrd Sisters for the latest installment of its excellent Summer Youth Theatre program. Wyrd Sisters, written by Pratchett in 1988, is a predecessor of stories like Shrek, which take multiple fairy tales and blend them together into one giant satirical comedy. What is notable about Wyrd Sisters is that it blends not only Cinderella and Sleeping Beauty but also Hamlet and Macbeth. The references are easily accessible. One needn't be too familiar with Shakespeare or the Brothers Grimm to follow this witty tale.

The Vortex's Summer Youth Theatre is known for its respectful treatment of its young participants. The program selects challenging material and doesn't come close to patronizing anyone involved. The effect of this respect is that the young actors' performances are mature beyond their years. Additionally, the youth return year after year, even continuing to work with the program as adult guest artists once they have graduated. Such is the case with one of this year's adult guest artists, Tricia Storie, who, in her six years with SYT, developed a potent stage presence. Other notable performances from adult guest artists were Traci Koesis' wonderfully witchy Granny Weatherwax and Steven Fay's Leonal Felmet, Duke of Lancre, who spends the length of the production trying to get blood off his hands, employing various implements such as a cheese grater and a golden rubber duck.

As for the SYT youth, all 11 participants in the program were a joy to watch. Natalie Houchins and Anissa Lashai McVea (alongside Koesis) were the show's strong protagonists, playing a trio of well-intentioned witches. Angela Loftus plays a clever fool and is one of several young women bravely charging forth into the male roles that have been assigned to them. Sebastian Garcia plays Pratchett's version of Hamlet's father, a ghost who obligatorily haunts his former castle. Stephanie Lumpkin delights in playing the self-assured, evil Queen. In another cross-cast role, Megan Krou plays Hwel, Pratchett's reimagined Bard, and she captures the frustration of a genius playwright who must babysit a gaggle of hotheaded actors. Adaire Kamen, Avery Ashwill, Lindsey Phillips, Gary Lewis Moore Jr., and Chance Parmlay each play several auxiliary characters and get some of the show's best laughs.

It is a witty evening of committed performances. Talena Martinez's costumes help bring the world to vibrant life. The only things hampering the show on opening night were some technical difficulties and a laborious sound design by David DeMaris. Fishing line or thread was being used for some magic tricks, and while the stage magic lasted only a moment, for the next three scenes, actors were fighting with this line -- getting tangled up in it, tangling others up in it, and dragging things around the stage. There are two fun uses of puppetry in the show. Unfortunately, DeMaris saddled both with a distortion mic, the volume of which was so loud in the small space that it rendered the puppets nearly unintelligible. It is a long play, and it is made longer by the overly complex transitions and stunts. However, though some of Mick D'arcy's directorial choices are heavy-handed, he does fine work with the most crucial aspect of his role, guiding his young actors into strong performances. The evening remains engaging, thanks to the youth participants and to Pratchett's humor.

Some of Wyrd Sisters' themes are remarkably ahead of their time. Or rather, they helped to define our present-day time. Pratchett remixes fairy tales. He discusses the idea of reality and how easy it is to manipulate reality. Had he mentioned the word Survivor, this guy would be prophet material. Audiences have become so familiar with the satirical retelling of old tales that Wyrd Sisters now rings a bit dated. But in this case, it's not "been there, done that" but rather "been there, started that." Wyrd Sisters is lighthearted, adventurous, and an excellent means for showcasing these talented youths.