Buddy Daddy: A boy and his dog 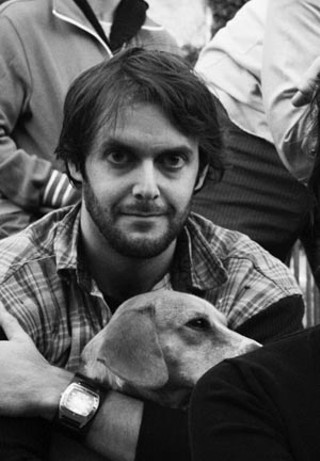 Simone, a lanky, handsome man resembling some garret-dwelling Parisian with a bad absinthe habit, and Robin, a beagle/dachshund mix as laid-back as Fred Basset on laudanum, together, working the extemporaneous theatre style into a set of compelling character studies. These are monologues, really, and as close as Simone gets to solo performance, because Robin is, after all, no wonder dog with a Second City pedigree.

"Improv is intimidating, even when you have a troupe backing you up," says Simone. "Doing a show with an intermittently responsive puppy dog whose only motivation is the hope of a treat is downright terrifying." You won't notice any terror on Simone's expressive mug during the show, though; you'll see only a talented man embodying a variety of characters, one after another, spieling out each story while a sweet but aloof pooch participates (often accidentally) in the narrative.

"I got Robin from the SPCA about a month after Hurricane Katrina," says Simone. "I sought out a supermellow critter, and I sure got it. If he weren't so pliant, I doubt I could ever do a show with him. We started performing about a year ago, on a dare from Chris Trew, and we've performed half a dozen times since then."

The night we saw Buddy Daddy as part of the Friday Threefer at the Hideout, the audience suggestion was "bizarre," which Simone used to spark the scene of a fortuneteller at a bazaar, the magic man attempting to unfold mysteries of the future for a client played by Robin. From there, the duo moved on to other scenes, including a sorority girl concerned over the dating habits of her roommate and a ballroom lothario relentlessly if vainly wooing his latest dance partner. For that last scene, Simone hoisted the hapless canine into his arms and did a slow tango back and forth across the stage while speaking unheeded words of seduction. Any of these gambits would be merely cute and quickly tiresome, except that Simone is no slouch at conjuring characters from thin air and bringing their personalities to vivid, often humorous life. The dog -- wandering around the stage, stopping to munch from his bowl of kibble, occasionally paying attention to his master's voice -- is, as they say in the Nyawlins parishes from which this two-specied duo hails, lagniappe.