Kathy Najimy and Mo Gaffney's Parallel Lives was a cult classic in the Eighties, but in the City Theatre production, it still feels fresh 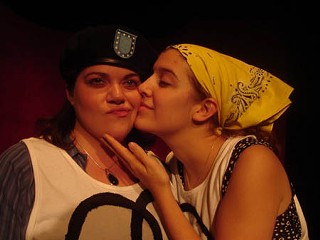 The City Theatre, through July 8

In the beginning, there are Kathy and Mo. Dressed as angels, they sit on the board of intelligent design looking over Earth's creation and comparing the colors of humans like swatches. "White's a little bland," says one. She's worried that "white" people might feel inferior to the more colorful people. The sadistic pair goes on to assign the roles of which sex "gets" to give birth, and they heartily laugh at recompensing the men with oversized egos.

This is how Kathy Najimy and Mo Gaffney's Parallel Lives opens. A cult classic back in the Eighties, it begets sketch after sketch flavored with feminism – the fight for which might seem somewhat nostalgic for Breanna Stogner and Kathleen Fletcher, two young women who grew up (or were born) in that time. But Kathy and Mo's portrayal of gender stereotypes and the nonaggressive satire in the writing still come off as fresh. The characters hit every age from schoolgirls to geriatrics. And in the City Theatre Company's production, Stogner's pistol-wheeling wit fits well with Fletcher's happy-go-lucky nuance, creating a bond between the two actresses that's less like Laurel and Hardy and more Kathy and Mo; they treat each other with affection.

In one scene, two Brooklynite teenagers accessorized like Eighties-era Madonna have just finished watching West Side Story. One asks the other if her boyfriend were to lop off her niece's knees, would she, like oh my God, still be her best friend? While Fletcher smacks her gums, Stogner starts teenybopper fast-talking, spitting high-pitched words like a machine gun. For a scene that would normally come straight out of an audition book, the duo plays off each other so well as to make it memorable.

In the next scene, the two are bedecked in more gaudy clothing, playing a pair of senior citizens who took a women's studies course because "we got the prerequisites," they repeat after each other in Jersey dialects. The scene turns somber when Fletcher's character, Sylvie, acquaints us with her gay nephew. Here, Fletcher's youth starts to show through a little. The scene strains to be touching but has trouble, since "coming out" is a topic that feels a little dated, and we're left waiting for the punch line.

The second act takes a strange turn into religion, highlighting the "sins" of girls, including one poignant confession of abortion. The other scenes, however, will have you bent over with laughter. In one court, we've got two lesbian poet lovers interpreting birth, barking paeans, and telling their labia to "let the Champagne flow." In the other court, we've got men menstruating. According to Kathy and Mo, they'd be bragging in the locker room over who's got the heavier flow and manhandling their periods like a football. There's also a glimpse into a woman's morning routine, from shaving in the shower to debating what to wear, all choreographed to an energetic symphony. Stogner has a keen intuition of when to improvise during this scene. With one side glance or gesture, she can be hysterically neurotic.