After three years as artistic director of Austin Script Works, playwright Colin Denby Swanson is leaving her leadership post at the organization to focus full-time on her writing 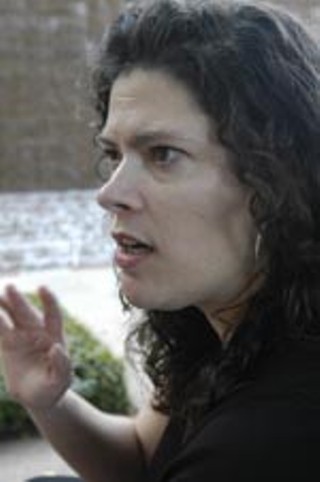 For three years, Colin Denby Swanson has been about the best friend a playwright in our town can have. That's because she's been the artistic director for Austin Script Works, the membership organization that supports playwrights by helping them hone their craft, develop their work, and get it seen. Like her predecessors in the job, Swanson has stayed plenty busy – in her case, helping host the 2005 Literary Managers & Dramaturgs of the Americas Conference in Austin, launching the Latino Playwrights Initiative, and helping members get into the groove of writing every day with a new writing practice called 30/60/90. But like David Mark Cohen, John Walch, and Dan Dietz – all playwrights, by the way – Swanson has found that the job of helping other writers has taken time away from her own writing. So she's following in their footsteps by leaving the leadership at ASW to concentrate full-time on her work. And considering that she's a participant this year in the National Endowment for the Arts/Theatre Communications Group Theatre Residency Program for Playwrights, it's a good time to do it. As reported earlier in these pages, Swanson is developing a new play about the late Clifford Antone with the Zachary Scott Theatre Center.

As for ASW, for the first time in the organization's 10 years, it will proceed without an artistic director or a playwright in a leadership role. Instead, Christina J. Moore, who co-founded the organization way back when and has been serving as its producing director, will have her position morph into that of executive director. And while she may not be a playwright herself, she's an award-winning director with 20 years' experience developing and directing new plays by writers such as Steven Tomlinson, Amparo Garcia-Crow, Cyndi Williams, Kirk Smith, David Gunderson, and the aforementioned Walch and Dietz. ASW is in the best of hands.

Arts Bullets
It's the Changing of the Bard, from Dietz to Swanson, and Tina Marsh plays it cool for CO2. Artists talk techniques, and teens tell you where to find Good Love.