In the improv created by Craig Kotfas and Ted Rutherford as the duo Vertigo Ramp, the unintentional chaos in the patterns is often as delightful as the patterns themselves 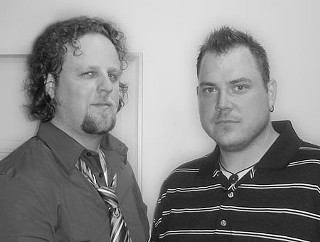 Craig Kotfas and Ted Rutherford: two men on a mission. Their mission, like the mission of all improvisers, is to create something out of nothing and, at least secondarily, to bring audiences some fun while creating. Do they accomplish this mission night after night and provide more comedy relief than, say, some flight-suited imbecile grinning for a photo op below a banner on an aircraft carrier? We can only nod vigorously in response.

Kotfas, the blonder and curlier of the duo, is also part of improv trio the Knuckleball Now; Rutherford, who looks like the youngest bouncer for some dive called Faceplant Charlie's, frequently works his skills within the troupe called Junk. Together, they perform a chaotic sort of response to audience suggestions, launching volley after volley of bizarre situations that only possibly sync up in the end but often surprise with their ingenuity. The night we saw them, the suggestion was "hula hoop," and it spawned a collection of characters tangential to the tiny island-state of Pau-Wau (in which everything – animals, vegetables, minerals, and abstract concepts – is also called "pau-wau") where hula-hooping is a native custom. There was the sole year-round inhabitant of Pau-Wau; there was the man filming a documentary about Pau-Wau; a newly engaged couple planning their Pau-Wau honeymoon; and, if memory serves correctly, a hula-hooping pirate with a Pau-Wau treasure map tattooed across his left buttock. In bringing these people and their situations to life, the Vertigo Ramp boys pulled a wide array of tricks from theatre's chock-full grab bag. Mime, soliloquy, gender-switching, slapstick, groan-inducing wordplay, and more informed the twosome's frenetic series of brief and diverse narratives. Also, Kotfas has a fine singing voice and is unafraid to use it in adding to the effectiveness of a scene when circumstances allow.

There are duos that operate more smoothly than the components of Vertigo Ramp, yes; it could be the newness of the pairing that accounts for the times when you can see, as it were, the gears kind of grinding while the machinery of their show moves forward. But, as opposed to sketch comedy, improv is often improved by such hesitations and missteps: They provide opportunities to be capitalized upon and thus can increase the laugh factor and also work in the favor of the players. (Well, unless those players suck to begin with; then it's a losing fight, and everybody should just go home and consider masonry as an avocation.) Vertigo Ramp, as we've noted, doesn't suck at all, and so the unintentional chaos in the patterns is often as delightful as the patterns themselves. And those are some damned delightful patterns.

The Institution Theater Is the Next to Close
Shuttering the beloved venue is “bittersweet,” says co-founder Tom Booker