The Threepenny Opera, the deliciously caustic musical by Brecht and Weill, has been reinterpreted by Austin Playhouse, with unfortunate results, as a kind of broad slapstick

The Threepenny Opera, the deliciously grim, caustic collaboration between the socialist crusading of Bertolt Brecht and the brilliantly dissonant musical talents of Kurt Weill, has been reinterpreted by Austin Playhouse, with unfortunate results, as a kind of broad slapstick. Snappily reworking John Gay's The Beggar's Opera, Brecht and Weill used the story of Macheath, the debonair cutthroat, and his associates, the prostitutes, beggars, and thieves of 19th century London, as a mirror for a Weimar society on the verge of implosion from widespread poverty, vice, and official corruption. While the play is mired in dark humor with no shortage of wry comedy, to present Brecht's lacerating attack on social injustice and the complacency of the bourgeoisie as an opera buffa shows an almost willful disregard for the intentions of a man for whom the highest and only true function of theatre was to instruct and incite social change.

In addition to its undeniable aesthetic appeal, Brecht's fascination with the use of artifice toward that end initially lends the decision to set the play in a Victorian circus some interesting validity. The tawdry and colorful disarray is evocative of the atmosphere of a Berlin cabaret, and having the actors warm up onstage before the play begins gives a passing nod to Brecht's ambitions to break down the fourth wall, to erase the boundaries between audience and performer – the better to disarm the viewer into addressing his relationship to the often harsh social commentary being presented. In a truly lovely touch of staging, the opening spotlights are directed by cast members on the sidelines holding mirrors over their heads. It is a simple, elegant gesture, perfect in tone and execution. As the play moves forward and it becomes apparent, with some jaw-dropping amazement, that the indigent, the maimed, and the felonious – the "poorest of the poor" – are to be presented quite literally as circus clowns, as loud, stomping, grimacing fools, the appeal of the concept quickly fades.

Overall, the actors show a praiseworthy disinclination to shirk the more repulsive aspects of their characters, but as they seem to have been encouraged to exaggerate to no end, it becomes difficult, if not impossible, to feel any sympathy for them or outrage at the economic conditions that created them. This becomes problematic during the many times Brecht stops the action in order to deliver browbeatingly sincere polemics. It is tough to swallow social commentary from characters who are not made absurd and ridiculous primarily by their abject state but are simply, to all appearances, buffoons. Corley Pillsbury has a lovely, clear singing voice, but the rest of the time her Polly is fairly shrill, and Michael McKelvey gives us a Macheath woefully bereft of the charm and murderous assurance that make the character compelling. Even Jenny, she of the resplendent bitterness whose revenge fantasies verge on dementia, is played by Boni Hester with the flat "hand on hip, upturned chin" posturing of a cardboard chippie. Only Huck Huckaby as corrupt Chief of Police Tiger Brown and Amber Dupuy as his daughter, Lucy, perform their roles and deliver their songs with a welcome straightforwardness and ease.

In general, the singing is excellent, if oddly phrased at times to further accentuate the comedy or get a laugh, and the group numbers have a great rousing vigor. The band, with only four performers, does a remarkable job of handling Weill's orchestration, which was written for seven and often performed with 10. In fact, the little band, desultorily attired in floppy bow ties and the occasional battered hat, watched the goings-on from the rear of the stage with a hapless resignation that evoked a sense of Brechtian irony and pathos far more amusingly and astutely than anything else in the production.

To leave a performance of The Threepenny Opera with the impression that those at the fringes of society, the criminal or the unfortunate, are little more than ludicrous clowns indicates a miscalculation in staging that is not only ill-advised but has crossed the line into reprehensible. 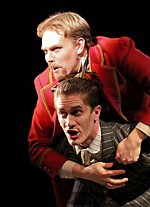