TexARTS' staging of Carousel found the humanity in this unusually dark musical, bringing us close to even the cruelest characters and taking them to a place of comfort and light

He's a bit of a thug, this Billy Bigelow. Oh, he's plenty handsome, with a square jaw and a face to swoon for, but you can tell he knows it; his slow swagger broadcasts the man's cocksure confidence in his own looks. It shows off something darker, too; with every step, you can see the weight of that chip on his shoulder, the resentment that dogs him, that's to blame for that clench in his jaw and steely stare just a stone's throw from mean. He has the look of a man with a hair-trigger temper, and it's no surprise when he turns violent, even when that involves raising his hand to a woman.

Watching Patrick Cassidy saunter menacingly through the role in TexARTS' production of Carousel, radiating this roiling discontent, made me appreciate anew the risk that Rodgers and Hammerstein took with this musical. In what was just their second collaboration for the stage, they took all the goodwill and good fortune they'd earned with Oklahoma! and gambled it on this churlish, hotheaded bruiser as the romantic lead. It's as if they replaced Curly, the irrepressible cowpoke who wins the hand of Laurey in Oklahoma!, with the sullen, loutish farmhand Jud Fry, letting him get the girl and everything. That asks a lot of the audience, especially when Billy is hardest on the woman with whom he's supposedly in love. He tries to take advantage of her initially. He lies to her. He's cold. And, yes, he strikes her. It's a long haul with the character before he gives us much of anything to root for.

Unless we can feel how alone he is, how cut off from the rest of humanity. Billy isn't merely a brute driven by rancor and rage. He's a haunted man, craving a connection he can't find or doesn't believe exists. It's only when he meets Julie Jordan that he feels a first spark of connection – a connection that she, too, is desperate to make, because she's in her way as alone as he is. And when the story jumps ahead many years to show us their teenage daughter, she has inherited that feeling of isolation. Loneliness is in many ways the key to this musical, the quality that unlocks the humanity of these characters. Feeling that, we can suffer Billy's cruelty to Julie and the way she accepts it and still hold on to some hope for them and their child.

At least we could the way TexARTS played it. The company managed to find the vulnerable embers in the hearts of their characters and fanned them into flames. Jill Blackwood imbued Julie with an unfathomable yearning. As she watched Julie's friend Carrie – an ebullient Molly Wissinger, beaming smiles from here to Boothbay Harbor, Maine – rhapsodize about her beloved Mr. Snow, Blackwood's eyes went misty with longing. And on meeting Cassidy's Billy, she was the picture of uncertainty: hands twisting behind her back, eyes unsure where to land, glancing from him to sky to her shoes. She knew he was trouble, yet her loneliness drew her to him. And for his part, Cassidy, without sacrificing his character's dark traits, let us feel Billy's attraction to her, shading it with confusion and a kind of relief at finding someone who could complete him. He built on that memorably in the moment when Julie tells him she's pregnant. As beautifully staged by director Brad Dalton, Blackwood steeled herself for an angry blow, and Cassidy paused long enough and with a blank enough expression to put a gripping tension in the air before he finally signaled his elation.

Of course, the evening was not completely fraught with angst and tension. Carousel has its share of Rodgers and Hammerstein rousers, and as in the two previous TexARTS productions of The Music Man and Big River, the company delivered the kind of high-spirited movement and song for which American musicals are celebrated. With relatively little space – owing to the onstage presence of the 25-member orchestra, crisply conducted by Lyn Koenning in a striking, white gown – the dancers were "bustin' out all over," particularly in the number "Blow High, Blow Low," which featured a spectacular turn by a quartet of young Irish step dancers. And the chorus provided a vocal lushness that made the score feel rich and fresh.

That was never more true than with "You'll Never Walk Alone." It's difficult to hear the song at this point, after having it drilled in our ears by so many Jerry Lewis telethons and bad lounge singers and school choirs, but in this context, after seeing these characters struggle so with isolation, with being apart, the song's reassurance that we will always have someone with us, sung by so many voices with such conviction, stripped away the hokum and restored its power. What began as a musical unsettling in its darkness ended in an anthem of comfort and light. 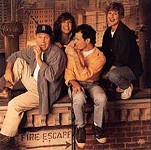 The Manhattan Transfer with the Austin Symphony
Local Arts Reviews