Is That Science?: The elements of smile

The initial results of the experiment Is That Science? – wherein members of the theatrical company St. Idiot Collective interacted with the element Improvium – were fast, furious, and funny 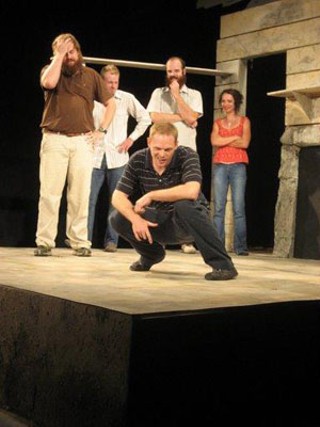 The Austin improv scene, like all improv scenes, comprises many elements. Each person in the scene is a solid, more or less, and these solids combine in various ways with the core element, the radioactive gas Improvium, to form the various sizzling or sputtering compounds displayed on local stages to the delight (most often) of their audiences. Sometimes the combination of performer and Improvium is a natural match and forms an instant, highly charged bond; sometimes the bond has to be worked for, the performer learning through much practice how best to match his or her valences with the electrochemical requirements of the gas.

On Friday, June 22, at Salvage Vanguard Theater, we were pleased to witness the results of an experiment called Is That Science? Is That Science? is a subset of the theatrical St. Idiot Collective, the troupe of performative savants that matriculated, one year or another, via the academic rigors of St. Edward's University. Jenny Larson, Jeffery Mills, Adriene Mishler, Brent Werzner, David Higgins, Adam Sorenson, and the Chronicle's own Alan Metoskie: These were the elements under consideration. A few members of the troupe were already well combined with Improvium, had in fact become addicted to the gas while very young and were now exuding radiation likely to cause a sort of contact high among the previously unaffected. A few others were recent converts and still learning to maneuver with the Improvium as part of their atomic structures.

"Some of them weren't used to it at all," says Shannon McCormick, area specialist and program director of the SVT venue. "They called me in as a consultant, to help ease the combination on a molecular level. Improvium, as you know, can prove an especially tricky element to bond with. The first rehearsal, well, it wasn't pretty."

But what we experienced from the paying seats wasn't disappointing at all: seven performers working in pairs, deftly embodying the audience suggestion, "bacon," in one hilarious vignette after another. Separate bits – about unrequited love between two male roommates, about the unnervingly requited love between a farmhand and his porcine charge, and about the birth of a sentient and possibly messianic piglet – intersecting and eventually fusing to form a satisfying if somewhat wacky conclusion. The troupe was fast, furious, and funnier than John Dee in a tutu.

"Yes, they really came together tonight," says McCormick. "It was a bit unexpected, but there was chemical activity the likes of which far surpassed earlier indications. These guys were, scientifically speaking, on fire."

Until they burn out, we're eagerly anticipating the next experiment from Is That Science?