After a national search, the Zachary Scott Theatre Center found its new managing director, Elisbeth Challener, right in its own back yard 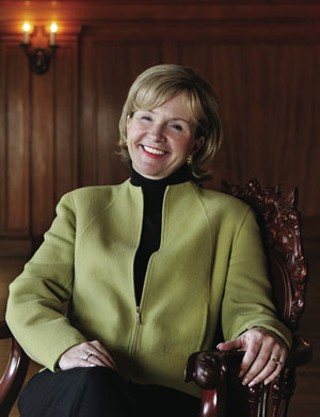 When the Zachary Scott Theatre Center went hunting for a new managing director to replace Ann Ciccolella, it undertook a search from coast to coast. But wouldn't you know it? The ideal candidate turned out to be right in its own back yard. Elisbeth Challener, who was hired by the theatre board three weeks ago and will join Zach officially on July 9, has been in Austin for almost two years, consulting with nonprofit arts organizations and working as the part-time executive director of One World Theatre. But it's not her local experience that so impressed Zach's board and staff. It was her 19-year stint at the Montalvo Arts Center in Northern California, where she led the transformation of the relatively modest community organization on a 175-acre estate into one of the largest nonprofits between San Francisco and Los Angeles with an $8 million budget. Challener joined Montalvo in 1986 as its development director, but three years later, she was made executive director, and under her stewardship, ticket sales shot up from a half-million dollars to more than $4 million, accompanied by a 13-fold increase in patrons, from 6,000 to 80,000. She oversaw the development and expansion of literary, visual arts, and performing arts programs; an education program serving more than 12,000 students; and the renovation of Montalvo's artist residency, now internationally recognized. What's more, she presided over the raising of more than $20 million for capital projects. That last fact is especially appealing to the Zach leadership, which is planning to build a new 500-seat theatre and education facility. Thanks to the approval of $10 million for the project in last November's bond vote, plus several major private donations, the theatre is about halfway along in its $25 million capital campaign. But raising another $12 million is a huge challenge, any way you cut it, and having someone leading the staff who's actually done that will be invaluable. As Artistic Director Dave Steakley puts it, this is "a critical juncture of our growth," and Challener's "expertise and management style align perfectly with Zach's needs."

Before that all begins, however, Steakley and the theatre will honor Challener's predecessor at a special party and tribute on Tuesday, June 26. Guests and speakers will toast Ciccolella's successful eight-year run as managing director, during which she's contributed to Zach both administratively (doubling contributed income, helping lead the victorious Proposition 4 campaign) and artistically (heading Project InterAct, directing such acclaimed productions as Who's Afraid of Virginia Woolf?, Full Gallop, and Cabaret). For more information, call 476-0594 or visit www.zachscott.com.