Salvage Vanguard Theater's staging of Maria Irene Fornes' Mud has plenty to compel our attention, most of it coming from the three gifted actors in the cast 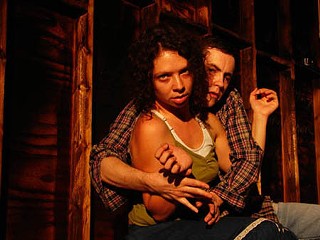 We first see Mae at an ironing board, pressing a pair of pants with the single-mindedness of a convict digging her way out of a jail cell. Which, in a sense, she is. The shack in which she lives; the existence she shares there with Lloyd, a grown man with the mind of a child; and her own illiteracy are bricks and bars imprisoning her; and she's desperate to break through them. She's taking classes to learn to read, taking ironing jobs to earn money, all to escape this life of poverty and ignorance. Meanwhile, across the room, his bare feet caked with dirt, Lloyd slouches in a chair, shiftlessly avoiding chores and badgering Mae with increasingly irritating questions. Finally, she yells at Lloyd that he'll die in mud as he's lived in mud, but she wants to die in a hospital, between clean, white sheets. It's a fierce and vivid expression of her desire to be free of this place, for something better for herself. Still, as anyone who's been knee-deep in muck can tell you, working yourself free isn't always easy, and sometimes the harder you try, the worse off you get.

That's certainly the case with Mae in Maria Irene Fornes' 1983 drama Mud, an almost painfully spare yet taut study of the shifting tensions among three poor, broken souls in a shanty somewhere in rural America. The third figure is Henry, a middle-aged fellow whom Mae brings home to help them read a pamphlet about the unnamed medical condition afflicting Lloyd. For a time, this older man appears to be her knight in shining armor, his relative intelligence and attentiveness to Mae – he gives her lipstick! – promising deliverance from her barren world. But almost no sooner does she invite her emancipator to live with her and Lloyd – a move that stirs up more ill will in the cantankerous rube – than Henry suffers a stroke that leaves him paralyzed to the point that he must be fed and tended like an infant. He becomes a kind of perverse mirror version of Lloyd: an adult man in a child's body. Thus, Mae comes to be caught between two childlike men, who bait each other like squabbling siblings and drag her deeper into the ooze from which she's fighting to get loose.

You can see that this won't end well. But that doesn't mean this production that opens Salvage Vanguard Theater's new home isn't compelling. It is, owing largely to the three gifted actors confined on Connor Hopkins' purposefully cramped set, a shack as lean and unvarnished as Fornes' text. They have little room on it to maneuver, to keep from bumping into one another, and those contacts – however minor, however innocent – ratchet up the antagonism among them, inflaming their tempers. Jenny Larson, Jeffery Mills, and Robert Pierson collectively raise the temperature onstage with firm, steady hands, degree by degree, such that we can feel the slow intensifying of the flame.

These three are likewise diligent in their portrayals of the play's characters, all damaged but each in a different way: Lloyd mentally, Henry physically, Mae spiritually. As Lloyd, Mills appears to have a permanent fog behind his eyes, and when the character tries to make some intellectual connection, it seems Lloyd's mental gears are sunk in sludge and can barely turn; he's the embodiment of thick. (This is never so apparent – and hilarious – as when Lloyd has to swallow a pill and Mills makes his exertions so tortured and agonizing that the act becomes a tragedy in miniature.) Pierson lets us see the very active mind of Henry through his eyes – which is especially effective once the character's paralyzed – but he shades Henry's intelligence such that we can see he isn't as smart as he wants us to think he is. It's a crucial revelation of character, subtly communicated, much like Pierson's slapping of the door frame as he exits to signal Henry's moods; his slaps are as eloquent as any line spoken. As Mae, Larson's yearning for more than her impoverished life burns with such intensity that it threatens to engulf their shack in flames and burn it to the ground. When she describes herself as "a hungry soul, a longing soul," Larson seems lost in the sense of it, her words all but dripping with pain.

These portrayals and the corresponding tension that is developed and sustained among these three are also a tribute to the work of director Jason Neulander, who honors Fornes with a simple approach that lets the power of the work rise from the characters and their knotted relationships. Henry, Mae, and Lloyd feel truly bound to one another, as if by ropes, so the struggles of any one of them cause all to sink together slowly but inexorably under the mud.