Sally Jacques steps off the elevator on the ninth floor of the J.J. Pickle Federal Building and leads the way to a suite that was a local base of operations for Lyndon Johnson during his presidency. The meticulously preserved rooms boast vintage chairs and sofas whose electric colors still crackle 40 years on, and the gleaming Magnavox entertainment center (with turntable and Astro-Sonic AM-FM stereo receiver!) looks like it was trucked in from the Oscar Snowden showroom yesterday. On one wall, black-and-white photographs capture LBJ and all the president's men in sober conference, making clear that this was a seat of power – which makes it all the more incongruous a setting for the Austin choreographer, who's as counterculture as they come and has been at least since Johnson sat in the Oval Office. But Jacques has a purpose here: The Pickle Building and the Homer Thornberry Judicial Building across the plaza to the north are the sites for Constellation, the new aerial dance work by her Blue Lapis Light company, and the dancers are being allowed to use LBJ's suite, Jacques announces with a mixture of delighted pride and astonishment, as their dressing room.

The idea of this archetypal smoke-filled room full of middle-aged male politicos being overrun by a bunch of young female daredevil dancers has a certain improbable beauty to it. But then, that's the way with so much of Jacques' work, which has taken spare, unsightly industrial spaces – warehouses, airplane hangars, a dumping ground for cement mixers – and, through the graceful movements of dancers such as Laura Cannon and Nicole Whiteside and the gorgeous music and sound of designer/composer William Meadows and vocalist Tina Marsh and the lush illumination of lighting designer Jason Amato, improbably transformed them into sites of spectacular, even transcendent beauty.

Nowhere was this more clear than with last year's Requiem, the Blue Lapis Light collaboration performed on the abandoned concrete shell of the Intel building. The work, which was just honored with an Austin Critics Table award for Dance Concert, drew 10,000 people and became, in Jacques' words, "a happening," with people viewing the work from not only the bleachers set up in front of the site but spaces all around it: in Republic Square Park, at the post office, in high-rise buildings nearby, from cars. And they would set up picnics, as they would for an event in a park. "It was amazing to see that there is an audience [for what we do]," says Jacques, and that it was "bigger than what we're used to – much bigger for us than we were ever used to."

Jacques was able to build on that newfound popularity with a work in the New Year's Eve celebration First Night, performed on the side of the 12-story Radisson Hotel. Thousands gathered around the intersection of Congress and Cesar Chavez and across the Congress Avenue Bridge to watch the piece, titled Angels in Our Midst. The crowd was so large and cheered so loudly when the dancers began their descent from the top of the building that Nicole Whiteside says it's as close as she's ever been to feeling like a rock star.

After that kind of enthusiastic public response to your last two projects, what do you do for an encore? To help answer that, Jacques turned to Steve Rutledge, the General Services Administration property manager who proved invaluable in the staging of Requiem. (Once the Intel shell became the site for a federal courthouse, it fell under his jurisdiction, and he helped Jacques and company negotiate the government regulations and requirements with the grace of a dancer.) Rutledge told Jacques what other federal buildings might be used for one of her projects, and from that list, she settled on the Thornberry. But since the Pickle was right across the plaza, she asked about it as well. Rutledge said she could use them both, so Jacques began to conceive of an aerial dance that would involve two buildings across from each other, one four stories and the other 10 stories, with the audience in between. She likens the dance to a tennis match, with the focus bouncing back and forth between the two structures. 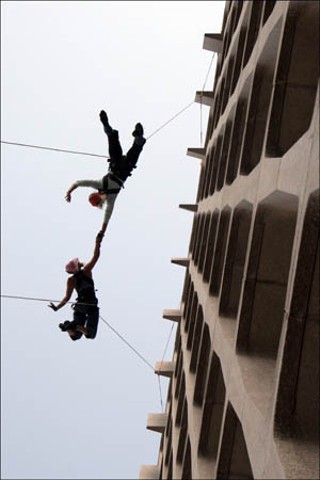 That's not to say that the choreographer had the whole performance mapped out in her mind before work on Constellation began. Fundamental to Jacques' approach is that the dance truly evolves from the site itself. "The one thing I avoid is coming in with an idea – 'This is what we're gonna do,'" she says. "I don't think there's anything that makes me more uncomfortable than seeing something put on something, particularly this kind of work."

Jacques will start with images inspired by the site itself – for instance, the thought of human bodies moving across the face of this huge building that dwarfs them suggested stars or planets in motion – but then that is shaped and enhanced by her collaborators as they develop their own concepts about how light will play across the space or music will complement the dancers' movements. But as they develop those ideas, they also have to adjust to the practical considerations of the site.

"There are a lot of factors that inform what is possible," Jacques says. "There are all these elements to look at. The building is this wide, but that much of it doesn't really have a roof, or it has a roof with all this stuff on it. Then you've got the rigger who says, 'You can't put it there.' There are times when we have to have discussions with Jason [Amato] about placement of lights, because the heat or this rope or whatever the issue is, if it's coming from above, it can be too close to the edge. On this roof [the Pickle Building], there are hundreds and hundreds of pebbles, and when the dancers climb over the edge, the pebbles drop down. So Jason pointed out to me, 'One of them drops in a light; that's $2,000.' When the dancers climb over the edge in the dark, they can't worry about what tiny pebbles are there. So our rigger will tie someone in, and we'll try to sweep them back as much as we can on both buildings.

"And are the dancers comfortable? What do Laura and Nicole feel about that? I had a night, before we went on the building, of, 'What am I doing here? This is peoples' lives. What are all of us doing?' I came back and said [to the dancers], 'We don't have to do this,' and they said, 'This is what we want to do.' So it's very informed of all of us, and it has to be that way because it's potentially dangerous."

That danger is ever present in Jacques' mind, but she and her collaborators risk it for the chance to obtain that moment of extraordinary beauty for which we all yearn and that can transform our lives. "When you go the beach and see the sun setting or you hear a bird at a given moment, you're pulled from your life. Everything that's troubling you or worrying you, just for that moment, it's [gone]," Jacques says. "As an artist, I go for those moments. Because that's the biggest connection to spirituality or the universe or whatever people want to call it. It makes you feel your sense of purpose and being."