Junk: When you're jonesing for the good stuff

The four improvisers who constitute the Austin troupe Junk prefer to work in long-form, and long-form certainly seems their forte 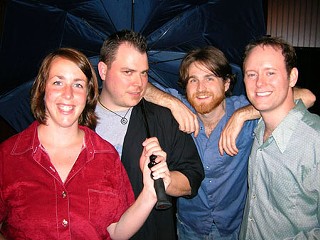 Andy Crouch, Andrea Young, Ted Rutherford, and Troy Miller. These four improvisers are collectively known as "Junk," but which of several meanings might they be implying? Junk, as in the small boat of Chinese origin? Junk, as in the stuff that Fred and Lamont Sanford used to sell between visits from Grady or Aunt Esther? Junk, like the dope that William Burroughs so famously pumped into his veins? Junk, as in what Ray Smuckles paid to get himself hoisted up by that one time?

Possibly all the meanings work together simultaneously, much the way in which this foursome works its sudden narratives on a comedy stage. This is where Crouch, the theatre manager of the Hideout, reveals his supramanagerial talents in concert with Young (also of Girls, Girls, Girls), Rutherford (also of Foolish Mortals and Vertigo Ramp), and Miller (most recently seen all shystered up in the Heroes of Comedy's Law & Order).

Junk prefers to work in long-form improv, and long-form certainly seems their forte. We caught them at ColdTowne Theater while the Hideout was shuttered in fear of a biker planet vis-à-vis the Republic of Texas rally. We witnessed the quartet, abetted by the manic Mike Ferstenfeld of Polite Society, take an audience suggestion of location – "inside a tornado" – and turn it into a half-hour show that played out in a repeating pattern of interlocking vignettes told from three different perspectives that, eventually, converged to a single resolution. This framework was built from gambits as silly and varied as the similes in this review's first paragraph. That such premises can be brought, coherently, to a satisfying conclusion is impressive enough if it's scripted; when it's done off-the-cuff with no prior discussion between the players, well, wow. I later checked with Shannon McCormick, co-producer of the annual Out of Bounds Improv Festival, to see if the excellence might have been a fluke.

"No," he told me, "those guys are good; they really know what they're doing. And it sounds like they were doing a Harold." Which, he elucidated, is a particular form of improv created by Chicago's legendary Del Close.

There are many different types of improv, of course, purveyed by many different troupes. We'll be covering some of those troupes in these pages, one troupe at a time for the next dozen weeks, hopeful that the experiences will be as enjoyable as what Junk provided this past weekend.