Wallace Shawn's 'A Thought in Three Parts': The author approves

After making a special visit to Austin to see Rubber Repertory's production of his play A Thought in Three Parts, Wallace Shawn called it 'an incredible moment in his life' 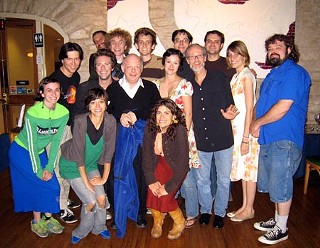 Their dinner with Wally

Matt Hislope and Josh Meyer of Rubber Repertory had been thrilled just to have Wallace Shawn give his blessing to their production of his notoriously sexual 1975 play, A Thought in Three Parts. Then Wally came to town. And saw the show. Twice.

"We're still in shock over Wally's visit," says Meyer. "He not only came to the show twice, but he spent quite a bit of time with everyone over the weekend. He blew us all away by being almost inhumanly kind, grateful, interested."

Shawn attended the performances on Saturday, May 19, and Sunday, May 20, showing up at the Vortex more than an hour and a half before curtain each night to hang out with the cast. (Of the Vortex itself, Shawn said, "I feel right at home.") Meyer reports he was almost overcome by his first view of their Thought. "He came back to the dressing room and could barely speak, he was so choked up. I think he managed to say 'so beautiful' and 'the amount of thought that went into it' before some of the rest of us started crying and hugging him. It was awfully touching not only to see 63-year-old Wallace Shawn so deeply moved but also to have had something to do with it."

After Sunday's show, Shawn treated cast, crew, and designers to a long dinner at Thai Passion, during which, Meyer says, he "repeatedly emphasized how amazed he was with the Austin audiences, how they seemed so young and excited and willing to throw themselves into a show without reservations, unlike the New York crowds. He also told us that this production was the first to solve the problem of the play's third part: a fairly quiet, thoughtful monologue that follows the second part's frenzied orgy. He said it's always been a difficulty with the play and that he'd spent a long time on the phone with his girlfriend the night before trying to explain how we did it."

If anything surprised the playwright even more during his visit, it might have been the person who ran up to Meyer and Hislope while they were walking Downtown with Shawn. According to Meyer, this "angel of a man ran across Sixth Street to praise the show. The man didn't even notice Wally at first and was so effusive that Wally later asked us if we'd paid him."

The episode, like the whole weekend, was more than anything Hislope or Meyer could have dreamt of. Which means it might be a while before these two drift back down to Earth. "He called the show 'an incredible moment in his life,'" Meyer says. "I think we'll be living off of that approval for a while."